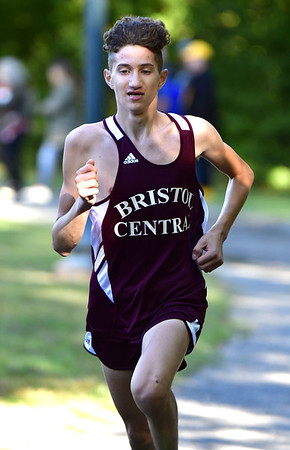 NEW BRITAIN - The CCC held its Region B championships for cross country at Stanley Quarter Park on Tuesday, and Bristol Central and Southington both walked away with winners.

Nate DeAngelo finished first in the boys race, logging a time of 15:42 to complete his senior season in memorable fashion. Teammate Francis Porrini III came in fourth place overall with a time of 16:28.

On the girls side, the top finishers were loaded with local talents, highlighted by Southington’s Grace Michaud taking first place overall with a time of 18:35. Teammate Jacqueline Izzo came in second, while Jessica Lombardo and Frenchie Riccio took fourth and fifth to complete a dominant day for the Blue Knights, who boasted four of the top five finishers.

Southington 3, Plainville 0: The Blue Knights took care of business against the eighth-seeded Blue Devils to advance to the final round of the Region B lower bracket with a clean sweep (25-8, 25-7, 25-13) on Tuesday.

The Blue Knights will face the winner of Lewis Mills and New Britain.

Southington completed its postseason experience at Maloney on Tuesday, and it ended with a little bit of history.

The Blue Knights’ scores will be submitted to the CCC, as will all other teams, to determine places and results.