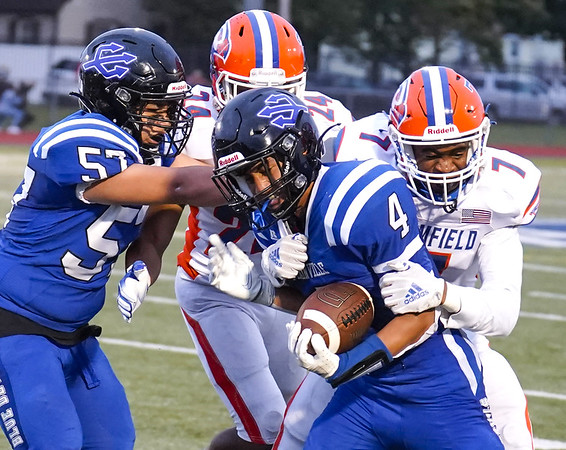 Plainville's Kye McGraw, right, runs with the ball as he's being grabbed by Bloomfield defenders during its game Friday. | Dan Heary Buy this photo
Published on Friday, 17 September 2021 22:05
Written by Ryan Ames

Dallas Rose and Cornellius Patrick combined for four touchdowns on 192 rushing yards as the Warhawks handed the Blue Devils its first defeat of the season in ugly fashion.

“There’s no ifs ands or buts, you can’t sugar-coat it, we got beat by a good football team,” Shea said.

On its first possession of the game, Bloomfield drove down the field and a 10-yard rushing score from Rose gave the visitors a quick 7-0 lead after the extra-point.

The Warhawks fumbled the ball on its next possession and handed the Blue Devils a great chance to knot the score.

Plainville put together eight plays that stretched down the field before it lost the ball with a fumble of its own. Bloomfield proceeded to go 87 yards in 11 plays for a touchdown in a major swing of momentum that the Blue Devils never regained.

“We get in the redzone, got to be able to score when we get into the redzone,” Shea said. “We can’t give the ball back. We have to play with confidence. There are times we’re our own worst enemy, a little bit, but it’s the game of football.”

A 28-yard score from Rose and a 70-yard sprint from Patrick made it 28-0 Warhawks, before a 65-yard punt return from Shane Bell and a 42-yard reception touchdown from Trevon Ortiz had Bloomfield ahead big, 42-0, at halftime.

Plainville didn’t offer much else during the final 24 minutes while the Warhawks scored one last highlight-reel touchdown to put the nail in the coffin for the Blue Devils.

With under two minutes left in regulation, Davien Kerr returned a Plainville punt 90 yards in what ended up being the final play of the contest due to the running clock.

“Is this going to define us, no,” Shea said. “But we got a ways to go. We’re a little thin right now but we’re going to coach them up, next guy in, next guy out. We’re glad we’re playing and we’re going to get better, I promise that.”