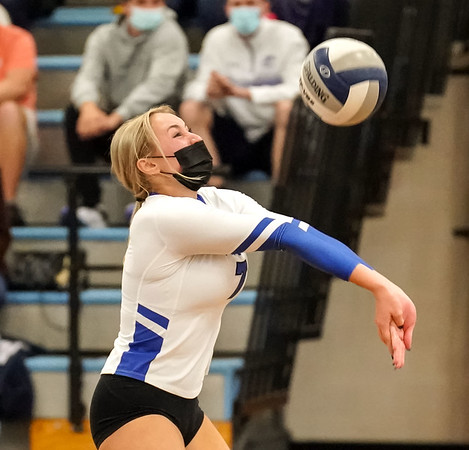 BRISTOL – The good news for the Plainville girls volleyball team is it has time to correct its mistakes after its loss to Bristol Eastern during the first round of the CCC Tournament on Monday.

The Blue Devils couldn't keep pace with a confident Lancers squad in the 3-0 defeat as they never really found a rhythm. Fortunately for Plainville, it's season isn't over as it's set to star in the Class M state tournament early next week.

A 15-5 regular season record puts the Blue Devils in the top half of all Class M teams ahead of their first postseason action in five years.

“We got a lot of practice leading up to next Monday,” Plainville coach Alle Caponigro said. “That's a good thing.”

Against Eastern, the Blue Devils had trouble challenging the Lancers defense as many self-inflicted mistakes allowed the hosts to stack up points. Plainville also didn't have a consistent answer to Eastern's Hannah Webber, who concluded the match with 24 kills.

Cleaning up the defense will be the Blue Devils' primary focus as numerous errors early led to the Lancers 19-0 run in the first set. Plainville settled down in the later sets, but still weren't sharp enough against an Eastern team that didn't give an inch.

As disappointing as Monday's defeat was, this Blue Devils season has been a resounding success given where the state of the program was just last year. Plainville recorded one victory in 2020 and now it finds itself as one of the best teams in Class M.

While the skills on the court have undoubtedly improved, learning how to navigate the mental ups-and-downs of a team experiencing success for the first time in a while has been a challenge.

“Last year was tough for us,” Caponigro said. “Coming back from that and them being put in this position, sometimes those feelings that you aren't good enough still peeks through. Every timeout we had I stressed to them, 'you are good enough, that's why you're here.'

“Look at this season compared to last year, they've come miles, but in the heat of the moment, it's tough for them to remember that,” Caponigro said. “It's tough for them not to beat themselves up about little mistakes instead of moving on. Hopefully this week we'll be able to get through that and be good for states.”

As part of Class M, Plainville won't be seeing Eastern again this season and will likely face a team it hasn't seen yet. Having no previous history of their opponent could be beneficial when the Blue Devils begin it's 2021 playoff slate Monday, Nov. 8.