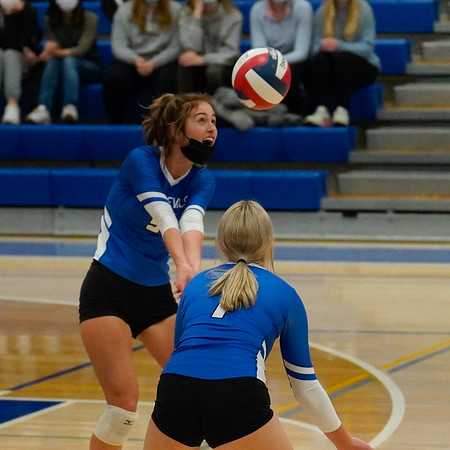 PLAINVILLE – It's been a season of firsts for Plainville girls volleyball this year.

The Blue Devils qualified for their first state tournament appearance since 2016, second-year coach Alle Caponigro accumulated her first winning season at the helm with a 15-5 regular-season record and on Monday, Plainville picked up its first playoff victory in five years after sweeping Abbott Tech.

The Blue Devils' sudden success has forced them to learn on the fly and while there have been bumps along the way, the positives continue to outweigh the negatives as Plainville makes a push in the Class M state tournament.

“As many seniors as we have out there, they've never experienced this type of energy, they've never experienced this type of tournament-style play,” Caponigro said. “It's quicker, it's faster, the coaches are more involved, everybody in the gym is more excited and enthusiastic about everything you're doing. We told them before this tournament started that this is either going to push you or it's going to dwindle you down a little bit and I think they're using it in the right way.”

During the CCC tournament last week, the Blue Devils suffered a humbling defeat to the eventual tournament champions Bristol Eastern in the first round. Confidence was down after the 3-0 loss but Monday's win over the Wolverines reaffirmed Plainville's belief in itself.

“It's tough to go into a conference tournament against the one team that's beaten you year after year after year,” Caponigro said. “That's a tough mental thing to overcome. As disappointed as we were, we knew that Bristol Eastern was going to go far in that tournament. It would've stunk if the team we played against lost in the next round. That would've stunk, but they went and won the whole thing. Kudos to them, they're a fantastic program, but I think my girls came in here this past week practicing, scrimmaging and knowing that they had what it took and they deserved to be in this tournament. I think that confidence and building it up in them and continually telling them, 'you deserve to be here,' is doing wonders for their mental health as well as their confidence.”

The Blue Devils turned to its best player in Wiktoria Galazyn against Abbott Tech and the senior came through with a solid effort all around the court. Plainville has other pieces to complement Galazyn's booming swings from the outside hitter position, but Galazyn elevates the entire team with her talent and she'll likely be counted on to do more of the same as the Blue Devils progress in the tournament.

“As great of a player as [Galazyn] is, the rest of her team supports her and they all trust each other enough to be able to say, 'hey, it's your turn to hit, hey, now maybe it's mine,'” Caponigro said. “Them being able to determine that on the court and know when to turn that on and turn that off I think is what is going to push us in this postseason.”

Ninth-ranked Plainville will take on No. 8 Woodland on Wednesday in the second round at 6 p.m.