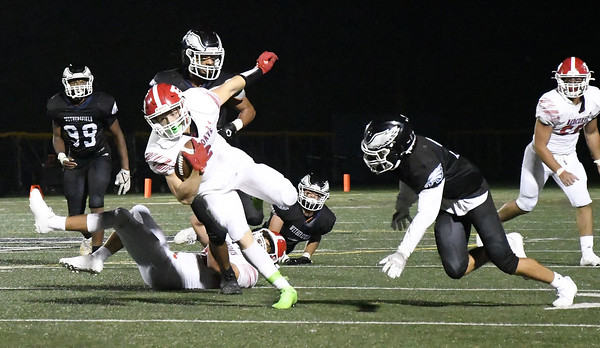 The Central Connecticut Conference revealed its all-conference football team this week and more than 40 local athletes made the cut from the seven area schools.

Starting in Tier 1, Diego Ortiz and Cameron Bond were the selections from New Britain following a rebuilding season for the Hurricanes. Ortiz and Bond were New Britain’s primary running backs during its 1-9 campaign.

In Tier 2, Berlin and Newington totaled 13 players on the team between the two programs.

Palmese pushed Berlin on offense with 1256 rushing yards and 17 scores while D’Amore recorded 156 tackles on defense, which topped the Redcoats totals by more than 85.

Brown passed for 2212 yards as Newington’s quarterback this season, Howe ran for 370 yards, and caught for 801 yards for 20 touchdowns and Leonard was second on the team in tackles with 31.

Bristol Central, Bristol Eastern and Plainville earned at least five nominations each in Tier 3, with the Rams topping out at eight selections.

Rosa solidified his spot as one of the best in the state with 41 rushing touchdowns on 2730 yards and also threw for 871 yards for the Rams.

The newly-announced Gatorade Connecticut Football Player of the Year capped off his high school career with a 9-2 record in 2021.

Marshall was impressive all season for Eastern as the senior back tallied 1728 rushing yards and 21 touchdowns while Austin Shorette was strong on defense for a team that allowed more than 30 points just twice.

Bakaysa came along nicely at quarterback for Plainville while Emery and Lamothe were his top options on the line.