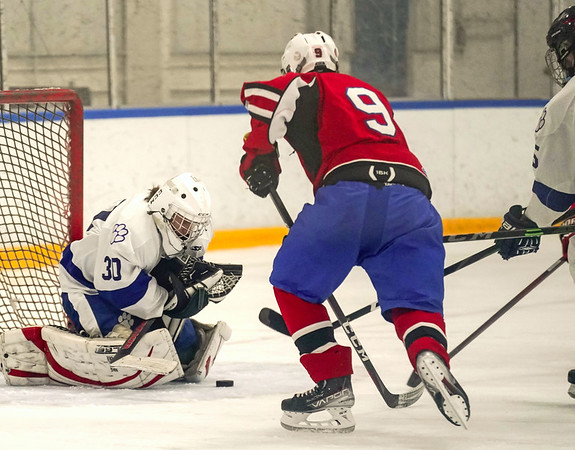 Plainville co-op goaltender Aaron McLeod (30) goes down for a save on a E.O. Smith/Tolland forward Wednesday night. | Dan Heary Buy this photo
Published on Wednesday, 15 December 2021 18:50
Written by TYLER HETU

CROMWELL – Plainville co-op boys hockey fell to E.O. Smith/Tolland Wednesday night thanks to a last second goal off the stick of Damian Till, putting Smith/Tolland ahead 3-2 with 2.3 second to go.

The season-opening loss for Plainville co-op comes after the Terriers came out of the gate strong, playing a strong defensive line in front of goalkeeper Aaron McLeod, who was starting his first game in goal as a varsity player.

Terriers head coach David Dubos said the defense was a focus in order to protect the keeper’s inexperience, feeling the blue line group did a strong job in helping him.

“Our defense has really been our focus. We have three goalies have little to no experience, and the guy in the net today (McLeod) was our backup goalie,” said Dubos. “… We knew we needed to play strong defensively and limit shots and block shots as much as possible. As far as that, we were really happy with how we executed that.”

Both sides went scoreless through the first frame, with defenses limiting offensive rushes. In the second period, Plainville co-op scored the first goal of the game on a corner pass to the middle of the hash marks in front of the net, with Jacob Nelson finding twine at 13:55. Teammate Jeff Thebeau soon followed later in the period at 5:25, extending the lead for the Terriers to 2-0.

A back-and-forth third period saw one goal get scored, despite several quality chances from both sides, coming from Till in the final seconds.

Four penalties across the third period from the Terriers hindered their chances of creating a go-ahead goal chance at full strength. In the final minutes, the Terriers played on the penalty kill while trying to hold the game tied. Briefly in the final minute, Smith/Tolland had a 5-on-3 advantage, eventually scoring the game-winner with a man advantage due to an Owen Davidson cross-checking call.

In total, the Terriers had 14 minutes of penalties, with Dubos saying “we were our own worst enemy,” in regards to the costly penalty minutes.

Despite the outcome, Dubos is happy with how his still-learning goaltender played Wednesday night, feeling more confident coming away from the game.

“We are more than impressed. He had an amazing game,” said Dubos. “I actually think he kept us in the game at points. Just great innate skills and reactions to the situation, and had some great saves. Moving forward, it makes us feel a lot more confident since coming into the season we didn’t have much of a goalie. … Now, we’ve got two goalies and we can lean on them.”