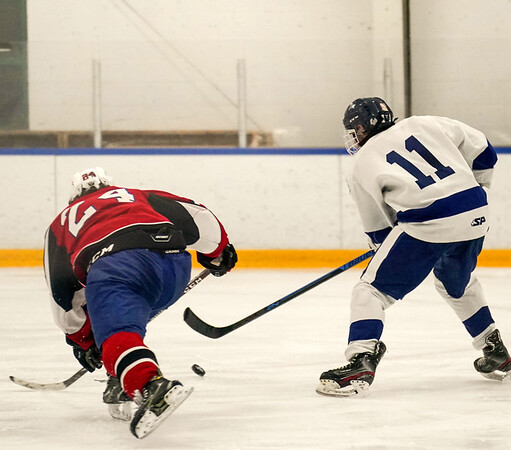 Plainville co-op's Jacob Nelson works around an E.O. Smith/Tolland defender on his way to the goal Wednesday night. | Dan Heary Buy this photo

CROMWELL – Plainville co-op boys hockey is off and running this season, embarking on the 2021-22 season with a loss in its season opener Wednesday night to E.O. Smith/Tolland.

The 3-2 loss had the Terriers in the lead up until the third period, and while down a man in the final seconds, Smith/Tolland was able to get the puck across the goal line with 2.3 seconds to go to lock up the win.

"Like I told the boys, we've got to keep our hands down and our emotions in check. We were our own worst enemy (Wednesday)," said Plainville co-op boys head coach David Dubos.

Dubos said adversity is going to be a big part of this season as Plainville's co-op with Rocky Hill, Middletown and Haddam-Killingworth get adjusted. Working through the adversity will be one of the first steps toward becoming a high-level club.

"Throughout the season, all we're going to do is face adversity and the successful teams are the ones who face it and learn to move forward from it. Everything I believe happens for a reason, and I think what happened (Wednesday) made something we need to work on and get better at to stand out. It's very clear that we need to work on clean hits and hands down and keeping our emotions in check. That as a team, if we can execute that, I think that's the next step towards us being successful."

Now that Wethersfield has gone off and fielded its own separate hockey team, the group is embarking on its second season together with the goal to return to its success it had two seasons ago. Dubos said a limited group from those teams remain, but the progress in building locker room camaraderie has been strong.

"Some of these boys were part of that program. Those are really our seniors because we were part of the Wethersfield co-op," said Dubos. "... Last year was really our first year as a new group. I see this year really as a kickoff to our first official season together and [we're] off to an incredible start. These guys are tight, bonded and they really have unified and see each other as brothers and work together as a family."

"They all know, they all get it," said Dubos on the seniors. "... We have strong senior leadership. We have eight seniors this year, so we are going to lean on them."

Bouncing back from Wednesday's loss, Dubos plans to give the boys a dry-land workout Thursday night while also going back to the film to see where exactly it went wrong in the third period for the Terriers.

"Really, I want to focus on the third period, because that's where it kind of fell apart. It's better to step outside yourself and reflect and see where things went wrong, and maybe why things were called the way they were called so you can have a different perspective on things. Again, it's part of the learning process of getting better. We have to keep reflecting and finding ways to deal with adversity.

"That's the great thing about sports, it keeps coming at you and you have to learn how to cope," added Dubos.