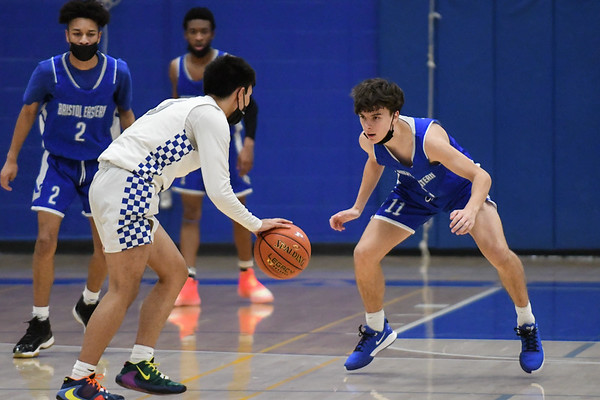 PLAINVILLE - The boys basketball season is officially underway for Bristol Eastern and Plainville as the two schools faced off at Plainville on Thursday night.

The Blue Devils successfully protected their home gym and started their season with a 49-30 win over the Lancers behind a balanced and controlled attack. Senior Cameron Lamothe’s double-double (15 points, 13 rebounds) led the way for Plainville as he anchored the paint on both sides of the floor.

Eastern’s Nasir Walker-Jenkins was the contest’s leading scorer with 18 points and a pair of three-pointers. An inexperienced team, the Lancers faced challenges running its offense and created decent scoring opportunities that matched their opponent’s.

“We knew they wanted to drive [to the basket],” Plainville head coach Scot Wenzel said. “We did a good job of keeping them out of the lane and keeping them to one [shot]. We did a great job boxing out and when they took a shot from the outside Cam [Lamothe] and Brennan [Staubley] did a great job rebounding for us.”

The Lancers played the first 10 minutes of their season before converting their first field goal when Elijah Borgelin finished a contested layup. All of Eastern’s previous seven points came on free throws as it trailed 12-3 after the first quarter.

The Lancers struggled to move the ball and find open spaces against Plainville’s defense. Quality shots were hard to come by and Eastern finished the first half with two made field goals on 14 attempts. Consistent free throw shooting kept Eastern in the game, however, as the team made all six of its attempts from the free throw line in the second quarter.

Walker-Jenkins shot eight of 11 from the free throw line and on his way to leading all scorers with 18 points.

“If you go on the road and don’t shoot a good percentage, it’s going to be tough to win,” Eastern head coach Bunty Ray said. “I thought we did a decent job defensively. We’re undersized, [Plainville] got some easy baskets inside. I think offense would’ve helped create more energy for us on the defensive end.”

Lamothe’s strength and size controlled the paint for Plainville as the Blue Devils challenged the Lancers to score inside. Lamothe led his team with 15 points and was one of the leading scorers in a balanced offensive attack. Dylan Brewer finished with 12 points and was Plainville’s only other player with double-digit points while Brady Wieczorek and Joe Vasquez each notched eight points.

The Blue Devils pulled further ahead after halftime, outscoring Eastern by four points in the third quarter before running away with the game in the fourth period. Plainville capitalized on the Lancers' struggles and Lamothe added to the lead with a series of buckets inside.

The Lancers will return to the court Monday for their home opener against Avon at 6:45 p.m. while the Blue Devils will be on the road at Bulkeley on the same day at 7:15 p.m.