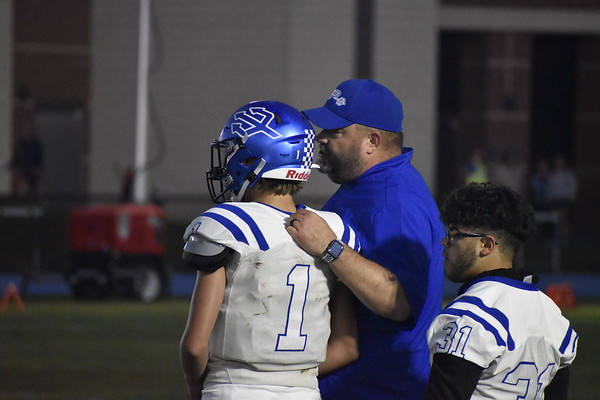 Just a few days ago Plainville head coach Tim Shea was explaining how lucky his team is to have MJ Bakaysa return as a captain and quarterback of their team this season. Just a few plays into their season opener at Lewis Mills, however, the Blue Devils’ luck went head over heels.

Bakaysa suffered a collarbone injury that looks like it could keep him sidelined for the season, according to Shea. Losing a team captain to injury is obviously a deflating feeling for a team, but Shea said the kids showed fight and Abarno played admirably after minimal reps leading up to Week 1.

After days of strategizing to fit Bakaysa’s skillset, the Blue Devils suddenly had to begin constructing a plan on the fly and figure out ways to get points on the board.

“It’s not what our game plan is at that point,” Shea said. “It comes down to, ‘what does he know? What can he execute?’ So, that’s what we called tonight. The play sheet shrinks immensely, but it is what it is.”

As Plainville’s preparations ramped up to Week 1, the Blue Devils were prepared to lean on their passing attack behind Bakaysa. Abarno is a wide receiver and defensive back as well as quarterback, meaning Shea now has flexibility in the way they’re able to use him moving forward.

“The added dimension Dom is going to add over the next few weeks is that he’s a bit of a runner, so we’re going to let him run a little bit too,” Shea said.

Shea noted this isn’t the first time he’s lost a quarterback early in the season to injury. In his second season at Plainville a similar situation played out and he said they “wound up being alright.”

“We’re going to have to go back to work tomorrow and retool some of the things we do, and we’ll go from there,” Shea said.

The head coach noted the team played harder in the second half when the emotion came back around.

Abarno was picked off once in the 25-14 loss and manufactured one touchdown drive in the waning moments of Week 1. He led Plainville down the field on one of their longest drives of the night with a few chances at the end zone in the final minute. The Blue Knights eventually broke through for their only offensive score on a fourth down rush.

Things should only get smoother with time for Abarno and the Blue Devils, and that seemed to be the case on Thursday in the late stages.

Plainville won’t have the advantage of a long week after playing on Thursday; the Blue Devils will be back on the road next Thursday paying a visit to the Bloomfield Warhawks.