Mike Orazzi | Staff Christian McCullough and Josef Dasrote during the inaugural Renaissance Fair held at the Southington Public Library in 2016. Buy this photo

Mike Orazzi | Staff Liz Hayden and her daughter Elise,4, during the inaugural Renaissance Fair held at the Southington Public Library in 2016. Buy this photo 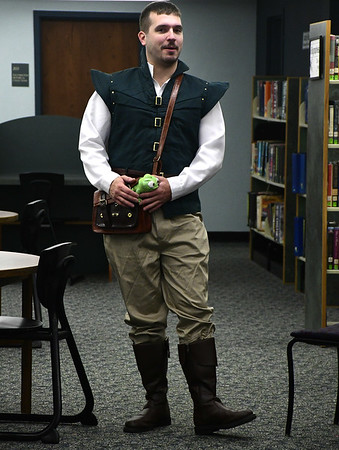 Mike Orazzi | Staff Mike Pelletier as Flynn Rider during the inaugural Renaissance Fair held at the Southington Public Library in 2016. Buy this photo

The Faire will be held from 11 a.m. to 2 p.m. Saturday at the library at 255 Main St. Molly Virello, children‚Äôs librarian and event organizer, said that this is the second year that the event has been held ‚Äì with the first event in 2016 drawing 600 visitors to the library.

‚ÄúWe weren‚Äôt really sure how it would go at first since I hadn‚Äôt seen any other libraries doing it,‚Äù said Virello. ‚ÄúBut, we had so many people and had so much fun that year that we knew we wanted to do it again. I‚Äôm really excited for it.‚Äù

The event will include face paintings, ‚ÄúYe Olde Storytime‚Äù, and arts and crafts. Costumes are encouraged and the librarians will be dressed up as knights and princesses. There will also be several special events that day.

There will be a ‚ÄúBirds of Prey‚Äù show at 11 a.m. with live raptors and owls. Visitors will learn about falconry as well as different facts about the animals themselves.

Virello is also running a ‚ÄúKnight School‚Äù where kids will don armor, practice sword fighting and target practice and run in relay races.

People will also be able to register for the ‚ÄúLord of the Pies‚Äù Pie contest which will be taking place that day from 12:30 to 2 p.m. Each contestant must bring a pie cutter and a written list of the ingredients to the competition. The basic criteria for a pie is anything with an intended crust: sweet pies, savory pies, pie pops, pop tarts, crusted quiche, tarts, open top pies, lidded pies, slab pies, etc. Each contestant may vote, if they wish, but not for themselves.

This program is free and open to all ages. The attending public will eat and judge pies entered in the contest.

‚ÄúEven if you don‚Äôt want to bake a pie, we are always looking for tasters,‚Äù said Virello.

One grand prize winner will be eligible to win a gift card from Williams Sonoma.