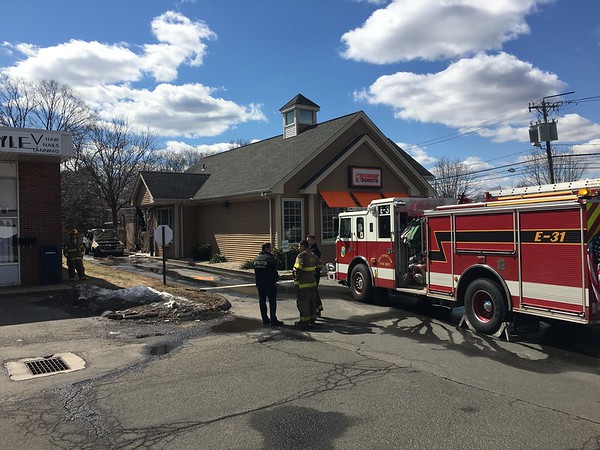 Charles Paullin | Staff The Dunkin' Donuts, 262 Meriden-Waterbury Turnpike, that had a car fully engulfed in flames in the drive-thru, which can be seen in the distance. Buy this photo

Charles Paullin | Staff The scene of a car fire on Rt. 9 northbound past exit 25 around 8:30 a.m. Friday morning. Buy this photo

SOUTHINGTON - A Chevrolet SUV was fully engulfed in flames in the drive-thru of Dunkinâ€™ Donuts and had to be towed away Monday afternoon.

The driver was the lone occupant of the vehicle and was able to get out of the vehicle with no injuries, Deputy Fire Chief Scott DiBattista said. No one else was injured in the incident.

The health inspector and building inspector deemed the building safe, DiBattista said. Maintenance crews were on scene about an hour and half after the fire to work on the building, he added. An employee with Dunkinâ€™ Donuts, who declined to give his name, said the building was expected to be open by the evening.

The Southington Fire Department received the call at 12:17 p.m., DiBattista said. The fire was knocked down within 20 minutes of when the call came in, according to the departmentâ€™s Twitter page.

A cause of the fire was being investigated by the Fire Marshalâ€™s Office.