Woman taken to hospital after rollover crash in Southington 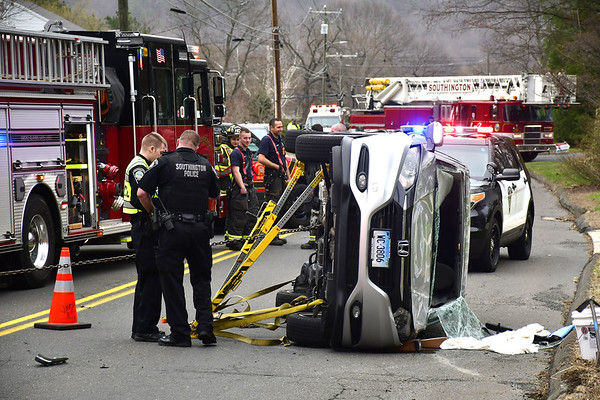 4/18/2019 Mike Orazzi | Staff The scene of a one-car rollover at the intersection of Loper Street and Annelise Avenue in Southington on Thursday afternoon. The driver was extricated and transported from the scene. No more information was available. Buy this photo

Mike Orazzi | Staff Police at the scene of Thursday’s accident at Loper Street and Annelise Avenue in Southington. Buy this photo

SOUTHINGTON - One person was taken to the hospital following a rollover crash on Thursday.

Police, firefighters and an ambulance around 11:49 a.m. were called to Loper Street, near Annelise Avenue, where firefighters extricated a woman from a Honda HR-V. She did not report any injuries but was taken to the Hospital of Central Connecticut’s Bradley Memorial Campus to be evaluated, according to police.

Police said the woman, driving east on Loper Street, was struck by a Chevrolet Cobalt that initially stopped on Annelise Avenue and proceeded into the intersection, striking the right side of the Honda. The Honda then spun and rolled over, settling on its driver side, according to police.

The driver of the Cobalt did not report any injuries, police said.

The accident is still being investigated.