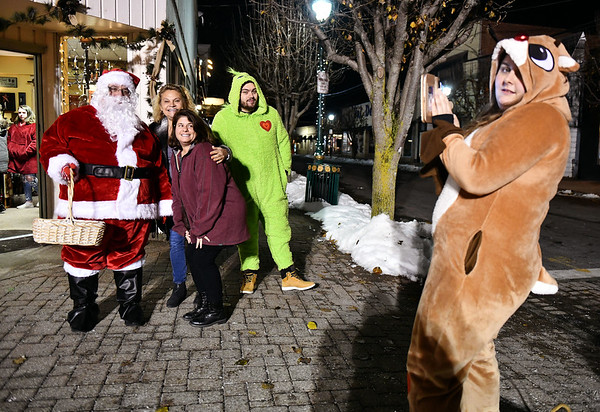 12/6/2019 Mike Orazzi | Staff The tree lighting during Southington's White Christmas in the Community on the town green on Friday evening. Buy this photo

Mike Orazzi | Staff The tree lighting during Southington’s White Christmas in the Community on the town green on Friday evening. Buy this photo

SOUTHINGTON - Hundreds of people filled the streets for the fourth annual White Christmas in the Community event on Friday night.

Free goodies, activities for kids and holiday cheer stretched from downtown Southington to the Village of Plantsville center, connected by a tractor hayride and a trolley car.

Rich Rothstein, better known as Mr. Magic, was aboard the trolley performing magic for the fourth year in a row.

“There’s a lot to do in town tonight,” Rothstein said to the crowded train car after an excited child interrupted one of his magic tricks with a thrilled exclamation at the sight of a firetruck.

Rothstein was not wrong. The White Christmas in the Community event featured ornament making, free cider and pumpkin fritters, live ice sculpture carving, rides in a horse drawn carriage, caroling, goat parades, and of course the opportunity to meet Santa Claus himself.

Ariella Morales, 5, excitedly waited in a line that stretched almost to the door of the Southington American Legion to tell Santa what she wanted for Christmas.

“I’ve been good,” Morales said when asked how she knew Santa would grant her wish.

The American Legion was one of 25 participating local businesses that had festive activities set up for the event.

One of the other participating businesses was Hustle & Hair, which just moved into their new location at 35 Center St. in June.

Owner Alexa Alejandro said she was excited to get involved.

“I came down here so much as a kid. I was excited,” Alejandro said.

She also noted that getting involved in an event like this is mutually beneficial to both parties.

“It’s a big thing for small businesses,” Alejandro said. “It was the first big event so I said why not.”

There were an additional 16 participants in Plantsville as well, including Faith Living Church, which had a big bonfire with roasted chestnuts accompanied by live music.

The fire provided a source of warmth for the outdoor event. According to Dawn Miceli, who was a part of the five-person planning committee for the event, the weather was much more favorable than last year.

“Last year it was really cold,” Miceli said. “This year it’s much better, and we might even get a few snowflakes.”

This is Miceli’s fourth year helping plan the event after combining two events that had been going on for decades separately in Plantsville’s and Southington’s town centers. The event is now much larger, and takes a lot to plan.

“It was a year’s worth of planning,” Miceli said. “The hardest part is getting all the sponsors so that everything is free. We couldn’t do it without the generous sponsors.”

Miceli took a moment to reflect on how the night was unfolding.

“It’s packed, it’s really packed. I love that. That makes all the planning worthwhile,” Miceli said.