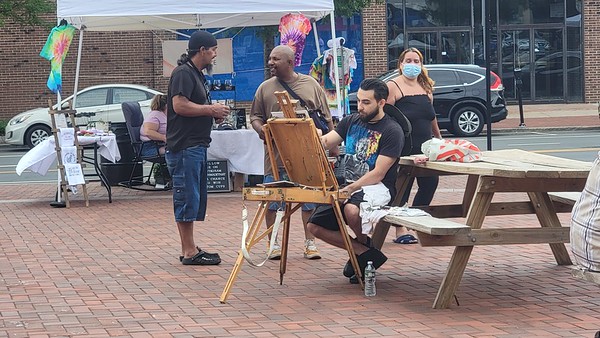 Dean Wright | Staff Art in Our Heart visitors stop and investigate the painting skills of James D'Amore. Buy this photo

Dean Wright | Staff Art in Our Heart shoppers purchase some pictures from the Something Beautiful store. Buy this photo

NEW BRITAIN – The second annual Art in Our Heart returned to Central Park Saturday with a variety of handmade goods, arts and crafts to celebrate New Britain’s downtown businesses and community.

“I traveled to Ireland several times and they do something similar to this program in one of the parks in Dublin,” said New Britain Downtown District Interim Director Dennis Morell. “I thought it was a great idea and we brought it back to New Britain.”

Morell said the event drew over a dozen vendors selling a variety of products.

“It’s bringing people to experience the downtown, to the new streetscape and restaurants we have here. It promotes the city through art,” he said.

Burnadette Mullins and Nancy Vurkin, volunteers of the New Britain Senior Center displayed a variety of knit products, bags or dolls whose proceeds would go back to further fund the many programs offered by the organization. The senior center offers physical and nutrition programs as well as activity classes for area residents. The pair noted the center would also be holding a cornhole tournament soon.

“We love it here,” said Vurkin of the event. “All the items are handmade by members of the center.”

Among other local vendors, Susan Yeagle, store manager for Something Beautiful, said the store had previously been stationed at West Main Street before moving to 240 Main Street in April, and took part in the Saturday pop-up arts and crafts event. The store supports the nonprofit organization CCARC which in turn dedicates itself to the professional growth of clients with developmental disabilities. Something Beautiful sells accessories, jewelry and home items.

“Everything seen in our store and out here is a donation,” said Yeagle of the store’s exhibit area. “We have generous donors and for instance a photographer who donates all her photographs to us. We’re happy and had a couple employees working out here today handing out fliers. We love New Britain and feel very supported by New Britain.”

As area residents and visitors perused the goods of the vendors in the market, James D’Amore set up his easel and began an oil painting upon a canvas while sitting at a picnic table.

“I’m painting the (Civil War Memorial) and was asked to come here and set up and I thought last minute I would set up and paint and see what I come up with. I’m going with it. I don’t want to do the entire thing but the essence of it,” he said, displaying the upper portion of the memorial.

D’Amore was selected last year as the winning artist to create a commemorative painting celebrating 150 years of New Britain. He noted an unveiling for the painting would likely be held in the near future.

“I feel great,” D’Amore said of Art in Our Heart. “I like to talk to everybody first before I set up, just to get a vibe and see what everybody’s got going on. Now, I feel like I’m part of this whole situation. I’m from New Britain so I already feel at home, but I feel even more at home now talking to everybody and I see all the love. That’s what I want to portray even more of.”