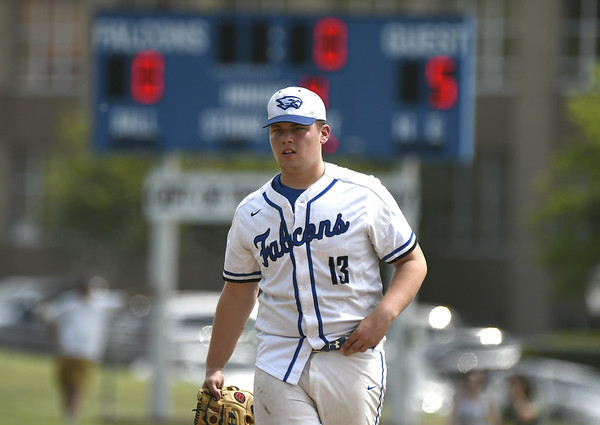 Dante DiRubba picked up the win in relief of starter Nick DeLucia. DiRubba pitched 3 1/3 innings, allowing only one unearned run on two hits. Justin Butterworth earned the save, facing just one batter and striking him out to end the game.

Dylan Gagnon, who came on in relief of Ethan Rembish, pitched well, allowing only one earned run, but took the loss for St. Paul.

Woodland scored the first two runs of the game off Rembish with a walk to Jason Claiborn, a single by Colby Linnell, and back-to-back RBI singles by Justin Butterworth and Justin Marks. Rembish was unable to finish the inning and Gagnon came on to get the final out.

St. Paul cut the Woodland lead in half in the top of the second inning. Ryan Parent led off with a walk, advanced to third on Shaun Remillard’s double and scored on Walker Sharp’s sacrifice fly to right.

Then St. Paul took the lead in the top of the fourth inning. Parent led off with a walk again and Sean Crean singled. With one out, Sharp was hit by a pitch to load the bases. Catcher Chris Mills delivered an RBI single to tie the game, but Crean was out at the plate trying to score from second. Gagnon hit a deep fly ball to left that was misplayed, allowing Sharp and Mills to score, and St. Paul led 4-2.

Woodland got one back in the bottom of the frame when Claiborn’s two-out routine fly ball was dropped. Zach Bedryczuk took advantage and stroked an RBI single to drive in Claiborn and make it 4-3.

Woodland took advantage of another St. Paul error to tie the game in the fifth inning. After leadoff hitter Justin Marks was hit by a pitch, Nick DeLucia laid down a sacrifice bunt. The bunt was fielded, but the throw sailed over Ryan Parent’s head and down the first base line, allowing Marks to come all the way around and score from first.

Woodland scored the final run of the game in the bottom of the sixth. With two outs and nobody on, Linnell singled and promptly stole second. Butterworth followed with an RBI single and Woodland had the final run that it needed to win the game 5-4.

Southington 6, Enfield-Somers 1: The Blue Knights won all but the No. 2 singles match as they improved to 11-3 overall for the season.

Sweeping the doubles matches were Nate Zmalicki and Mike Kwok over Ethan Kelly and Duy Pham, 6-0, 6-1; Adam Kosko and Kyle Narowol over Andrew Jones and Ben Fawthrop, 6-0, 6-2; and Tyler Heidgerd and Jacob Sutton over Alex Torres and Jacob Duga, 6-0, 6-0.