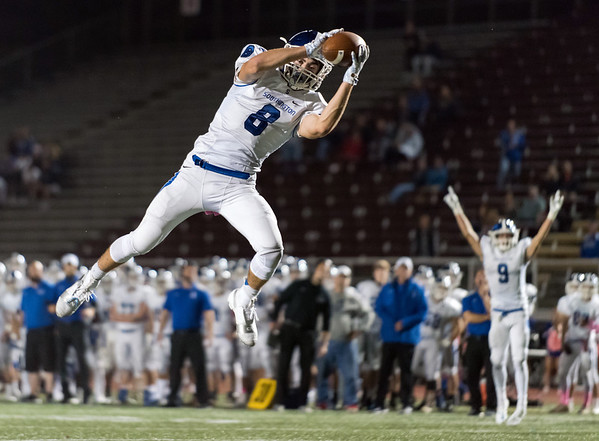 Southington football defeated New Britain 27-24 at Veterans Stadium with the winning touchdown coming with thirty six seconds left in the game. Jacob Flynn (8) goes up for a touchdown catch late in the game. Wesley Bunnell | Staff Buy this photo
Published on Wednesday, 15 May 2019 21:06
Written by DAVID GLOVACH

The Blue Knights standout receiver will head to Storrs as a preferred walk-on for Randy Edsallâ€™s Huskies.

â€śIâ€™m really excited,â€ť Flynn said. â€śBeing from Connecticut, UConn is a big-time school. I was a fan growing up. You grow up watching them on TV. Itâ€™s a great opportunity.â€ť

Listed at 6-foot-1, 180 pounds, Flynn caught 44 passes for 816 yards and a team-high 11 touchdowns last season, his first as a full-time starter. Southingtonâ€™s offense averaged 35 points per game and reached the Class LL state tournament after going 10-0 in the regular season. Flynn was named All-CCC and All-State in LL for his performance.

At UConn, Flynn will join former Southington players Tim Oâ€™Shea and Jay Rose. Oâ€™Shea recently announced his transfer to Storrs from Wagner. Both Oâ€™Shea and Rose are tight ends.

â€śWeâ€™re excited for him and the opportunity he has,â€ť Blue Knights head coach Mike Drury said. â€śHe really flourished for us this past season. He always had a really good skill set - speed, athleticism - but he really developed his confidence. Once he got that confidence in what he could do, he became a beast. This is a great opportunity. There are 105 players on that football team and 85 have scholarships. I know his goal is to be one of those guys that gets one.â€ť

Flynn was looking at a number of schools, mostly at the Division I-FBS and Division-II level, to continue his football career. But once he received a text from UConn recruiting coordinator and wide receivers coach Aaron Smith during the middle of his senior season inquiring about Flynnâ€™s interest in the school, the receiver knew it was too good of an opportunity to pass up.

â€śBefore the season, it didnâ€™t really cross my mind too much,â€ť Flynn said. â€śBut after I got the text, thatâ€™s when things started to progress. I went for a visit and I liked their facilities and thought it was a good fit for me, both education wise and for football. Then when I visited one of their spring practices, I knew itâ€™s where I wanted to go.â€ť

For Flynn, the progression to break into the Blue Knightsâ€™ starting lineup to play for Edsall and the Huskies not only shows the time and effort he put in, but what the program he played for under Drury is about.

â€śI think it says a lot,â€ť he said. â€śIt says a lot about our work ethic and how much time we put into it at Southington. Everything we did there helps from the offseason on. We have great coaches there that do a really good job of making sure weâ€™re ready. We always go out and compete.â€ť

Flynn will continue to train with the Blue Knights before he goes to UConn for fall camp as he prepares for his high school graduation. Thereâ€™s still plenty of work to put in.