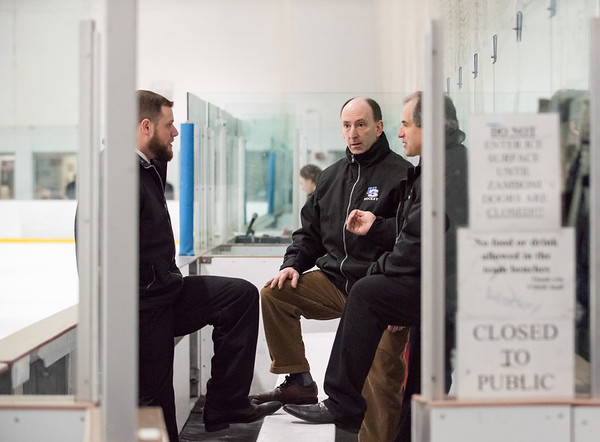 When members of the Hall-Southington ice hockey team heard of their beloved head coach Brian Cannon’s cancer diagnosis, they knew they needed to do something to help a man who had significantly impacted their lives, both on and off the ice.

Sure, a GoFundMe had already been set up for Cannon’s medical expenses and to help his family and has already raised over $75,000, but the Warrior-Knights wanted to take on their own project as well. So, they’ve decided to help their coach in the way their coach always helped them: by getting on the ice and playing some hockey.

What started as an idea by former captains Mike DiPietro and Chris Gambardella has become a widespread goal for the team, which is planning a charity hockey game over Thanksgiving weekend to bring back recent graduates like DiPietro and Gambardella, and others who have played for Cannon over the last decade. The plan is in its early stages, but once the idea surfaced, the team knew it was the perfect way to honor their beloved mentor.

“I hope it happens,” former Hall-Southington defenseman Michael Kwok said of the alumni game. “It would be really nice to have coach see us come together as a team again. I’m sure he would really appreciate it.”

The potential charity event would help raise money for Cannon’s cause, while also bringing together the many lives that have been impacted by Cannon during their high school careers.

“We talked to the rink and I think they have a slot for us,” DiPietro said. “We’re going to need a lot of help, but I think we might be able to pull it off.”

Judging by the GoFundMe response, the Warrior-Knights shouldn’t have any trouble finding people willing to help with the cause. The team expects a large group of past players to lace up their skates like they did for Cannon in their high school days, but it would also be an opportunity for future players to see what Hall-Southington hockey is all about.

“It would definitely open up a new chapter for upcoming kids as well,” Kwok said. “It would be a good way to show that Hall-Southington isn’t just a team. It’s a huge family.”

Kwok and DiPietro are confident any prospective high school hockey players would see just how close the Hall-Southington community is and how inspiring Cannon’s story is, but even without the past two weeks that have included a cancer diagnosis, a rallying of friends and family and a desire to continue coaching after major surgery, those who played for Cannon know the hockey scene itself was always enough to be inspired when it comes to Cannon.

“I drew a lot of inspiration from him,” Kwok said. “Like me, he was never one of the tallest people on the ice. I was one of the shorter kids on the team and coach Cannon would always tell me stories about his playing days and showed me videos and he absolutely shredded on the ice. It really inspired me to make up for my size by hitting or skating harder. I think that's something Coach really embodies well.”

Now, as Cannon battles with a rare form of cancer in his hip, it’s his players’ turn to inspire their coach. Normally, it was Cannon offering his players words of encouragement on the rink and in his office when he wasn’t chuckling at pop culture references from his boyhood that often left the team looking around the locker room in confusion, but now, the Warrior-Knights plan on offering their own words of encouragement and motivating words for their coach.

“He was always there for anything I needed to talk about,” DiPietro said before going to visit Cannon in the hospital. “It's going to be tough to see him like this, but I'm sure I'll be able to give him some hope in what he's going through. I have no doubt that we’ll help him in any way we can.”

In the eyes of the Warrior-Knights, it’s the least they could do for a man who helped mold their lives. Cannon’s life will likely be much different when he attempts to return to his coaching duties that he’s held for the past decade, but whatever Cannon needs, Hall-Southington will be there to help him, just like he’s done for them.

“Coach has always been there for us,” DiPietro said. “He's always tried to help develop us as a team before individuals. He always wanted to keep coaching us, even with his leg problems. I think moving forward the team will adapt to helping coach him as well, even if he can't be on the ice. We'll all adapt together.”