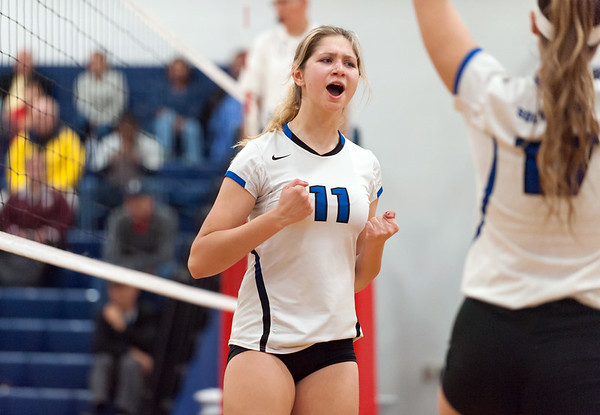 SOUTHINGTON - The task of constantly replacing departing talents is common for high school coaches. Most key contributors to a high school team arrive to varsity as sophomores or juniors, and after a short few years of contribution and development, those key pieces graduate and move on, leaving the coach to begin the process all over again.

Southington girls volleyball head coach Richard Heitz acknowledges this yearly challenge, though even after dealing with it for his now 18 seasons at the helm, this past roster turnover has been particularly difficult.

“Those are tough spots to fill,” Heitz said of the five departed seniors that were a fixture of the team’s undefeated regular season and state semifinals appearance last year. “I think we've got some work to do and the kids realize that.”

Tryouts for the Blue Knights concluded last weekend, and while nine girls from last year’s state tournament team were on the court, there quite a few new faces.

Among those who left were the team’s three all-conference selections from last year in Haley Larrabee, Jenna Martin and Lynsey Danko. The formidable trio (along with setter Olivia Carpenter, who also graduated) was not only a source of leadership on the court, but was among the best passers in the area, which Heitz believes was his team’s greatest strength last season.

“This game is really based on serving and passing,” Heitz explained. “A lot of people might have looked at our team last year and assumed that we weren't as successful as we were, but we passed very well. I think we have stronger serving this year, but those are three really good passers that we have to replace, and that's going to be a challenge. Jenna Martin was a great passer, and there might not be someone on the roster that can replace that. We'll just have to see if we can plug those holes the best we can.”

As expected, tryouts showed Heitz that Southington’s passing game needed work, and after a pair of JV juniors that were expected to be varsity contributors transferred to Cheshire Academy, the need to develop the underclassmen and returning starters into more consistent passers quickly became prevalent.

“We realize early that it's an area that we'll need to see some growth throughout the season in order to be successful,” Heitz said. “We're not as deep passing-wise, so we're trying to see what pieces can plug what holes.”

The Blue Knights may be shorthanded in some aspects of their game, but they have also gained something in return. Heitz has noticed an improvement on the serving side, and upon initial glance, his front line appears to be bigger and more athletic. Should the passing take time to materialize, Heitz just might have to change the DNA of his team from last year, and hopefully wind up in the same place.

“We know what areas we have to work on to be successful,” Heitz said. “That was a special team last year. Every year the team is different and you have to play to your team's strengths. Every year those strengths change.”

The 2018 Southington team certainly left its mark, winning two Class LL state tournament matches after grabbing the No. 1 overall seed. That will be difficult to repeat, especially given what the Blue Knights lost in their four top passers and middle hitter Keishla Rosario, but Heitz sees potential in this year’s group. They can be successful like their predecessors, but they just might have to do it differently. For a coach that has dealt with change for nearly two decades, Heitz is ready to take on another season of roster turnover, even if this year saw a particularly special group say goodbye.

“Every year you have kids graduate or change schools or decide to focus on another sport,” Heitz said. “We have a very talented freshman class come in so I'm expecting them to grow and we'll see where that gets us.”