Analysis: Southington football's defense continues to show it's among state's best after win over Ridgefield 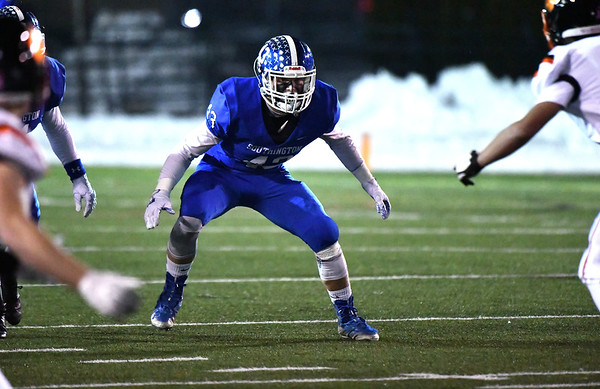 SOUTHINGTON - After the rest of the Southington football team left Fontana Field to escape the cold, a few of the players stayed behind to answer questions about the Blue Knights’ win over Ridgefield in the Class LL quarterfinals.

It was Southington’s first playoff victory since 2016 - the Blue Knights didn’t qualify for the postseason in 2017 and were knocked out by Fairfield Prep after a second-half collapse last season - and while not a long period for most programs, for the Blue Knights, who expect to compete for a state title every year, it offered a moment of excitement before giving way to the turning of a business-like-approach of there’s still a ways to go. So the group of players on the field talked about the key moments in the game, how they attacked the Tigers offensively and defensively, and what they had to do to be better for the next round.

But it was Carter Uhlman, one of the team’s starting receivers, who said something particularly interesting, and something that has been more than true for all but one game this season, following Wednesday’s 13-9 win to set up a semifinals showdown with familiar foe Darien on Monday.

“If we score more than seven points,” he said, “we’re winning the game.”

It didn’t come off as cocky or arrogant or geared toward the Blue Wave. It was more stated with fact about the way the Southington defense has been playing. The Blue Knights (10-1) have always embraced an old-school philosophy behind that unit and a strong running game, it’s just been that this season more people have taken notice, even with the emergence of their passing attack led by Brady Laffery and his quintuplet of receivers (Uhlman, Josh Vitti, Jake DelMonte, Jack McManus and Shane LaPorte) since the mid-season bye week.

Southington’s defense has only allowed opponents to score an average of 11 points per game this season and that number significantly decreases in the second half of the season to a mere 7.2. After giving up 21 or more points three times over the first five weeks, the Blue Knights surrendered just seven to East Hartford and Simsbury (another team in the Class LL semifinals. The Trojans will take on top-seeded Newtown) in back-to-back games. The unit followed it up with back-to-back shutouts of Glastonbury and New Britain.

“It’s all about playing with confidence and energy,” linebacker Max Casella said. “We trust each other in all aspects on the defense and know that each other will handle their own jobs.”

But it’s been the past two weeks, and more specifically the opponents’ final offensive plays, were the defense has really shined.

In Thanksgiving’s Apple Valley Classic showdown against Cheshire, the Blue Knights didn’t pull out a win until the defense came up with a goal-line stand on a 2-point conversion attempt from the one and a half yard line in the second overtime. On Wednesday, facing a 4th-and-14 from the Southington 32-yard line with 45 seconds left in the fourth quarter, Tigers quarterback Owen Matthews heaved a pass to the end zone for Gianni Gorham, only for it to be knocked away at the last second.

Overall, the Blue Knights held a Ridgefield team (8-3) that came into the matchup averaging 25.5 ppg to its fourth-lowest point total of the season and kept an offense that had been averaging 430 yards of total offense a game to just 243, including 29 on the ground. The unit also intercepted Matthews twice and linebacker Billy Carr recovered a fumble on a muffed punt. Ridgefield’s signal caller ended up completing 22-of-35 passes for 219 yards, his longest pass going for 38.

Even after that throw, the defense came up big. With the Tigers at 1st-and-10 from the Southington 15, the Blue Knights allowed a 2-yard pass and forced two incompletions before Ridgefield had to settle for a 30-yrd field goal. There was also Weston Brick’s interception when he picked off Matthews in the end zone with 4:12 left to play in the third quarter.

“I just think we’re a great unit,” said defensive back and captain Johnny Carreiro, who had one of the team’s three takeaways in Wednesday’s win. “We play great together and we play fierce. We wanted to prove that it just wasn’t a regular season thing or a CCC thing. We wanted to show that we’re a great defense and that we can play all offenses.”

It was especially important with Southington struggling to find the end zone itself.

The Blue Knights finished with 230 total yards of offense and their second-lowest scoring output of the season behind the 24-8 loss to none other than Darien in Week 2. Dillon Kohl capped off an 8-play, 42-yard drive that began with 4:27 left in the first half with a 5-yard run, while Uhlman put the finishing touches on a 6-play, 53 yard drive with a 5-yard catch for the deciding score.

But the defense had a hand in that second touchdown. Carreiro set up the score with an interception.

“We had our backs against the wall a couple of times there and they play every play,” head coach Mike Drury said of the defensive effort. “The DBs did a great job. They had a tall task [Wednesday], seeing that they liked to spread it out and throw the ball as much as they did. I thought our guys did a lot of good things in that regard.”

It also hasn’t hurt that the defense is being given ample time to rest and recharge during games.

The Blue Knights have made it a habit of establishing their run game early and often. They’re averaging 156.1 rushing yards per game heading into the matchup with Darien and have logged 329 carries and 23 touchdowns to control the clock. That’s been evident over the last two weeks when Southington had 35 rushing attempts against Cheshire and 42 against Ridgefield.

Kohl has been the main workhorse, running for 148 yards and two touchdowns on 28 carries against Cheshire. He followed that up with a 30-carry, 122-yards outing against Ridgefield to give himself 1,113 yards and 13 touchdowns despite playing in just eight games this season due to a hand injury.

“I think he played great,” Drury said of his starting tailback. “He’s been a real force for us and makes plays and makes guys miss and gets vertical and does all the little things right.”

If this win showed Southington and its opponents anything, it’s that this group of Blue Knights is more than capable of playing a complete game. They don’t have to score 42 point to necessarily come out with a victory.

“It shows the character that we have,” Kohl said. “We were even down to begin the game. No one on the sideline was upset or made. It was just like, ‘let’s go. We have to put something on the board too.’”

And as Uhlman so eloquently put it, it doesn’t have to be a lot either.