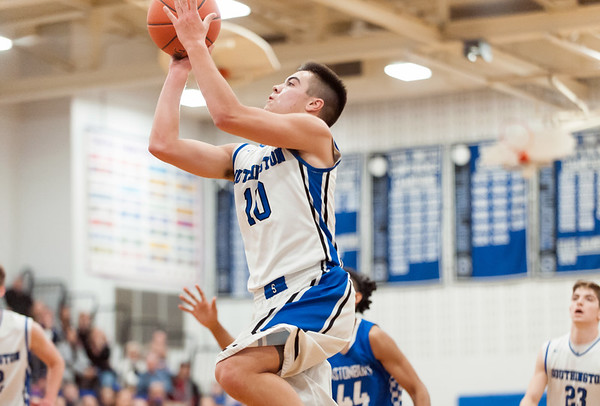 SOUTHINGTON - The Southington boys basketball team looked to be in complete control of its matchup with Avon on Monday night. After draining four 3-pointers in the first quarter, the Blue Knights held a commanding 10-point lead early in the second, generating all the offense they wanted.

Then, suddenly, the Falcons’ defense came to life and silenced Southington’s sharpshooters.

After the Blue Knights opened the second quarter with a bucket to take an 18-8 lead, Avon ran off a 17-2 run to seize control and send Southington to a 52-38 loss at home, the team’s second loss in three games after a 5-0 start to the season.

“They just started hitting shots and we started missing shots,” Southington’s Jake Napoli said after leading the Blue Knights with 17 points. “Our defense was a little slow on our feet tonight. I don’t know why that was, but we’ll come back from this.”

The Blue Knights opened the game with plenty of offense, setting the tone with a Napoli 3-pointer to give Southington the early lead on the first possession of the first quarter. But Avon responded with a three of its own when Tyler Brokenshire connected from downtown to tie it at three with 5:30 left in the opening quarter.

The 3-point battle continued 30 seconds later when Jared Kelly drained a corner three off an inbounds pass, and after a fast break layup from Napoli put the Blue Knights up five, the Falcons pulled back within two off another three, this time from straight on off the hand of Ryan McGuire.

Southington opened the lead back up to seven on the fourth 3-pointer in the game in less than six minutes when Napoli hit from deep to make it 13-6 with 2:13 left in the first. After an Avon bucket, Kelly hit another three from the corner to open up an eight-point advantage for the Blue Knights heading into the second quarter. Twelve of Southington’s 16 points in the first came from beyond the arc.

The Falcons had their own 3-point spurt to start the second, as Jack Hall and Thomas Howard each hit triples to cut the deficit to four after trailing by 10. The run continued on a driving layup by Hall after a Blue Knights turnover, which Kelly ended with his own layup in transition to put Southington ahead 20-16.

A 3-pointer by Ben Angus, the fifth different Falcon to connect from long range, pulled Avon to within one, and a pair of free throws by Tyler Favre gave the Falcons their first lead of the game with two minutes remaining in the half. Two more buckets from Avon forced a timeout from Southington head coach John Cessario, who watched the Falcons rattle off a 17-2 run to turn a 10-point deficit into a five-point lead at the half.

“We stopped handling the ball the way we’ve been taught,” Cessario said. “I think them switching to man-to-man affected us. That was a big flip-flop when the game was tight the way it was after one quarter.”

Kelly, who finished with 16 points, tried to lead the Blue Knights on a comeback in the third by knocking down his third and fourth 3-pointers of the night to pull Southington within one, but the Falcons answered with seven straight after three consecutive Blue Knights turnovers to increase the lead to eight with three minutes left in the third.

“We have to take better care of the ball,” Cessario said. “Guys were getting the ball slapped out of their hands. It was everybody and we paid the price.”

After a block on the defensive end, Brokenshire drove the length of the floor and converted a 3-point play to open up an 11-point lead for Avon, while Southington continued to struggle on the offensive end following a fast start.

The Blue Knights continued to struggle in slowing down Hall, who added four more points and an assist in the first three minutes of the fourth to help the Falcons up their lead to 15. Hall finished with 17 points, tied for the game-high, while Southington’s shooters cooled off dramatically, recording just seven field goals through the final 24 minutes after hitting six in the first quarter alone.

“We knew coming in he was a good scorer, but for me, that’s on me as a captain,” Napoli said. “We have to be better than that to stop him. But there’s going to be games like this.”