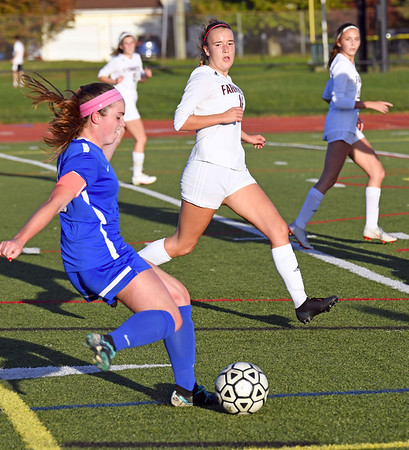 FARMINGTON - The Southington girls soccer team heads into postseason play without a blemish on its resume.

The Blue Knights, after finishing the 2019 regular season undefeated en route to a state championship appearance, finished an encore in 2020 after beating Farmington 4-1 on Thursday, the team’s 12th win of the season in as many games.

Southington jumped out to a 3-1 lead at the half after falling behind 1-0 early thanks to a Farmington goal from Sabrina Krouse off a feed from Abigail Reynolds. Maya Wroblewski tied the match with an unassisted goal shortly after, then picked up an assist on a goal by Morgan Hubert to give the Blue Knights the lead. Shannon Litchfield added an insurance goal when she and Micaela Potamis connected for a tally, and Shannon Litchfield put the game away in the second half off an assist from Chloe Bauman.