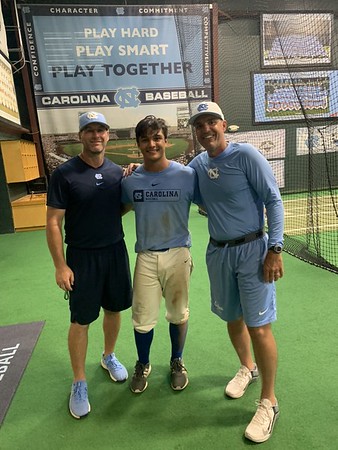 Southington baseball rising senior Jackson Rusiecki is heading to Chapel Hill as the Blue Knights outfielder announced his commitment to North Carolina on his Twitter account earlier this week.

Rusiecki helped Southington to a 20-1 record this past spring and became one of the Blue Knights' most reliable contributors.

“He had a great year," Southington coach Charlie Lembo said. "We didn't have these kids as sophomores so he came up and started pretty much every game. We moved him into the outfield and he has all the tools to be a successful baseball player."

Rusiecki finished among the top-five on the team in batting average and also recorded just one error in the field all season.

"His bat speed is amazing," Lembo said. "He hit about .350. He had a good year and he got better every day. He came to practice every day and he wants to get better."

On a team that also featured college-bound players in Devan Bade and Dante D'Amore, Lembo credited Rusiecki's unabashed determination that allowed the Tar Heels to take notice of the Blue Knights' slugger.

"Did I think he would end up at North Carolina? No, because the southern coaches don't come up here that much," Lembo said. "But Jackson had an opportunity to play in front of the coaches. He jumped on it and turned it into an offer. He's going to have that opportunity to see what he can do in the ACC, which is a great baseball conference.

"He brings that bulldog mentality every day," Lembo said. "Just seeing what he has, pure athletic ability. He can do pretty much everything and it's just a matter of work ethic and he proved that."

A three-sport athlete, Lembo also mentioned Rusiecki is only scratching the surface of his potential on the diamond.

“He's a three-sport athlete, football, wrestling, and baseball," Lembo said. "He'll bring that attitude to each sport he plays. Once he gets to that point where he just focuses on baseball, you'll see big improvements from him."

Southington's season came to an unexpected end during the second round of the Class LL state tournament this past season, but fortunately for the Blue Knights, Rusiecki returns next spring before he departs down south.