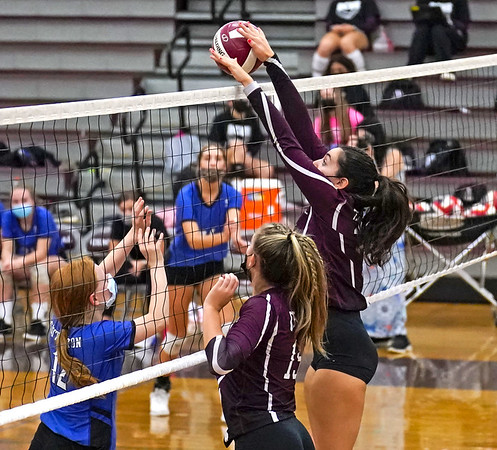 Abby Pirog, right, blocks a hit from Southington to win a point for Bristol Central. | Dan Heary Buy this photo 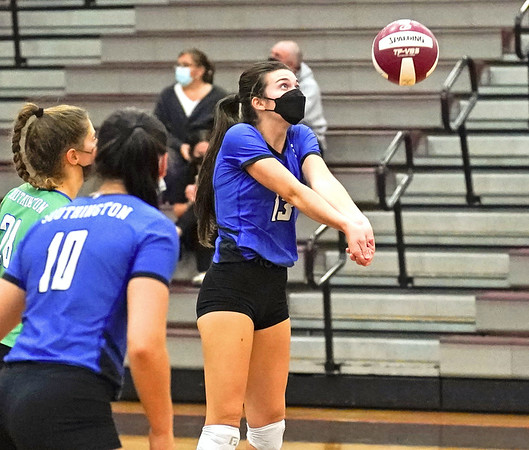 BRISTOL - Momentum shifted constantly at Bristol Central on Wednesday night as the Rams girls volleyball team hosted Southington in a battle between two of the top teams in Class LL. The energy ultimately resided with the Blue Knights, who came back to win the fourth set and leave Bristol with a 3-1 victory (25-13, 20-25, 25-22, 25-22). The win lifts Southington in the Class LL with a 12-4 record while Central falls to 13-4 with the regular season ending soon.

After splitting the first two sets, Southington prevailed in the hard-fought third and fourth sets and came back to win the fourth set after trailing from the start.

“The big thing was lack of communication,” Central head coach Lance Pepper said. “I think we were looking for someone to make a play, and we needed someone to make a play, but all six players have to be able to pass the ball. I think we kind of lost our composure. It was tough, starting off 7-1 in that fourth set and then we took our foot off the gas. We have to be able to close that game out.”

The Rams jumped out to a 7-1 lead in the fourth set and stayed ahead nearly long enough to force a fifth set, but the Blue Knights stopped Central from making any long scoring runs and kept the score close until tying it 21-21. Southington took the lead 23-22 on a service ace and won the ensuing two points to complete the win 25-22 after winning the previous set by the same score.

“We dug a huge hole and I’m happy the kids battled back,” Southington coach Rich Heitz said. “We’re young, we’re trying to learn how to win. We’ve been pushed like this all season long and I think we’re starting to get more in our confidence at a tight time.”

The competition heightened in the third set as the score stayed close right until Southington won the set 25-22. The teams went back and forth from the start of the frame with score tying 11-11 for the second set in a row. Upon reaching these ties in the earlier sets, one team took charge and went on to win, but neither team found room to gain an advantage on the other. The Blue Knights went ahead 17-13, but Central stayed close and came within two points at 23-21. Southington managed to hang on a lead 2-1 for the match.

The first set started competitive, but quickly turned into a dominant performance for Southington as the Blue Knights turned a 10-10 tie into a 21-10 lead before giving serve back to the Rams. Southington’s 12-point run put it in complete control of the opening frame as it won the set 25-13.

“They put us in system a lot on the free balls and we took advantage of it,” Heitz said.

Trailing 3-0 to start the set, Central won seven points unanswered to take an early lead. The set remained competitive until the 10-10 tie, but a slew of mistakes from the Rams and quality play from the Blue Knights allowed them to create an insurmountable advantage.

“I think it was that one serve-receive rotation where I had to make a few adjustments,” Pepper said. “We got to a point where we finally got out of it, but it was too late at that point.”

Similarly to the previous set, an 11-11 tie was the pivotal moment of the second set, but this time moved in Central’s direction. Four quick points from the Rams forced Southington to call a timeout and Central stayed ahead from there.

The Blue Knights never let the Rams make a big run, but also never cut the deficit enough to put pressure on Central. The Rams maintained a four-point cushion for much of the set and went on to win 25-20.

“The second set was huge for us,” Pepper said. “We were able to keep some composure, we kept the ball in play and we swung hard. We knew what to do when we were out of system and that’s what I need to see out of this team.”

The Rams will travel to Norwich Free Academy on Saturday for their next match while the Blue Knights host Bristol Eastern on Friday.