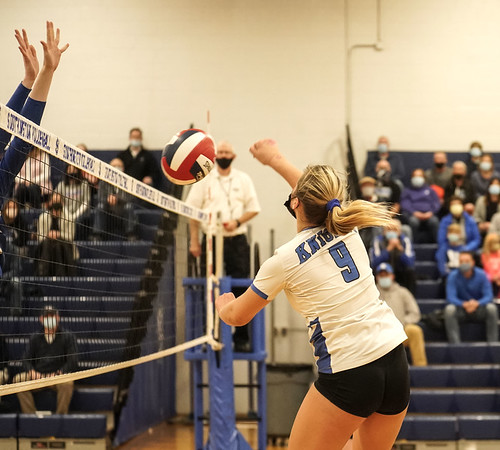 SOUTHINGTON – Three games into its new-look lineup, the No. 8 Southington girls volleyball team appears to be finding its confidence.

Losing Adriana Palmieri in the CCC quarterfinal round left a large hole in the Blue Knights lineup, but since then they've gone 2-1, including Thursday's dominant 3-0 win over Glastonbury in the second round of the Class LL state tournament.

Southington appears to have figured out a winning strategy with one of its best players sidelined for the rest of the season and it'll hope to continue to translate it into more wins on the court.

“They were fairly confident going into [Thursday's match],” Blue Knights coach Rich Heitz said. “They knew what to expect, they knew it was going to be tight. Even though we went up in two of the sets, it was very, very tight. They knew they had to take care of business and I kind of told them, it's like a job you have to take care of business and the pay is you get to play on Saturday. The paycheck is you get to move on.”

Alyssa Ferreira appears to have slid into Palmieri's post on the outside and the freshman made her presence felt against the Guardians with a team-high 10 kills and an incredible run of 14 straight service points during the second set.

Replacing a player of Palmieri's caliber isn't easy, but Alyssa Ferreira's stellar play seems to be just what Southington needs during the most important stretch of the season.

“Adriana, we figured out a few weeks ago she is kind of the lynchpin on things,” Heitz said after the Blue Knights' victory against Maloney. “You always got that one kid where everything is cohesive and Adriana is probably that kid on our team.”

Southington also welcomed back Gabby Ferreira to the court against Glastonbury after the sophomore was out during the previous couple of games. Gabby Ferreira played well with seven kills and seven service points, but her return also allowed the Blue Knights to put players in their normal positions in an important match.

Judging by the landslide result versus the Guardians, Southington felt comfortable the whole way through the contest.

“I think our intensity for the night was a lot better than we've had in other matches,” Heitz said. “I think the kids understood that they had the disadvantage with the size issue and we had to serve and attack aggressively and take them out of system.”

The Blue Knights will need much of the same when it squares off with No. 1 Cheshire on Saturday in the quarterfinal round. The Rams have been perfect so far this season and have only lost three sets the entire year.

Saturday marks the first time these two teams will meet in the postseason since 2014. Both teams held the same seed as this year and Cheshire took that match, 3-0.