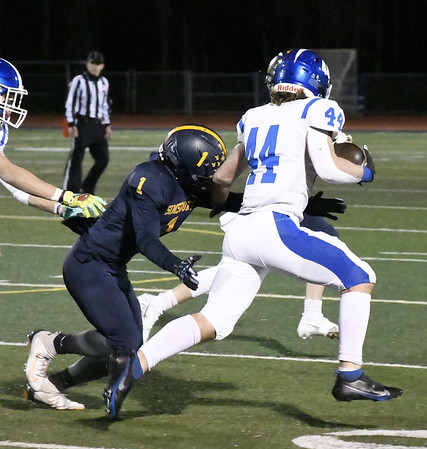 SOUTHINGTON - Southington (7-2) has one more chance to improve its postseason hopes in Class LL this week, and it comes down to a Thanksgiving bash against Cheshire (4-5) at 10 a.m.

The morning kickoff from Fontana Field in Southington brings back the Apple Valley Classic, a series the Blue Knights enter Thursday with a commanding 20-12 all-time record in.

Last time around in 2019 Southington came out victorious in a 21-20 overtime win. This time, it may not have the chance to go to overtime as the Blue Knights have rolled past opponents in wins, going on a four-game win streak through October and early November where they scored at minimum 42 points a game while allowing at most 15.

Last week's loss to Conard (31-24) puts Southington seventh in the Class LL rankings, and with a ninth consecutive win over Cheshire, the position can lock them into the postseason picture.

Cheshire, after running off three straight wins to open the season, has cooled considerably. Three straight losses to Norwalk, Xavier and Newtown had playoff chances dwindling, and a shutout win over Norwich Free Academy got the Rams back on track. But,a loss to West Haven and a Shelton loss last week have brought the Rams to under .500 with one game to go.

Cheshire will throw a variety of looks at Southington, with Mike Simeone leading in passing at 488 yards through the air. He's been turnover prone with six interceptions, but his running backs will help keep the ball moving for Cheshire when needed.

Christian Russo is the leader in the locker room with 760 rushing yards, scoring seven times, but has only played in four games (it's unclear if this is due to injury). Other backs that will likely be seen Thursday morning are Jeffery Gonzalez and Connor Moran, who have 173 and 161 yards rushing, respectively, with two scores each. Overall, the Rams have scored by the run 17 times, meaning it's likely going to be ground and pound on a day where the temperature is going to hover around the 40's.

On defense, Kevin D'errico is the leading tackler with 75 in total, nine coming for a loss. Evan Russo leads in sacks with eight and EJ Quint has three interceptions with five pass deflections, both team-leading.

Southington will be led by the passing attack of Jack Barnum, who has 1,520 yards passing this season with 17 scores and three interceptions. To compliment him on offense is Javon Thomas and Lincoln Cardillo, who have 699 and 667 yards rushing respectively with a combined 20 scores (10 each).

At receiver Ryan Delmonte is the leader, with 30 receptions and 516 receiving yards. He also has seven scores, and has been Barnum's go-to target.

On defense for Southington, Jackson Rusiecki and Austin Pszczolkowski are tied in tackles to lead the team with 71. Pszczolkowski is the leader in stops for a loss with 19.5 while Rusiecki has the lead in sacks with 10.

In the secondary, the Blue Knights have one interception each from Delmonte and Ray Williams. Kamron Beaudoin has 14 pass deflections