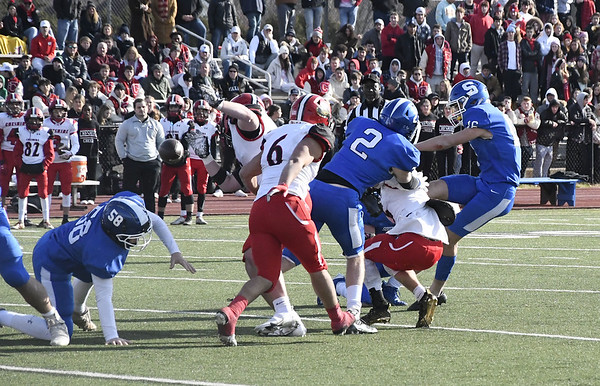 SOUTHINGTON - In Thursday's Apple Valley Classic, with playoff implications on the line, Southington football pulled out all the stops to ensure it would have a chance to play in next week's Class LL playoffs.

The gamble to improve its chances started with an onside kick, and from there, the momentum swung.

Fourteen plays later the Blue Knights shot ahead to 10-0, thanks to a Javon Thomas 4-yard touchdown. Lincoln Cardillo followed suit a few minutes later, extending the lead to 17-0 with 2:29 remaining in the third.

With Southington limiting Cheshire to one first down through a flag-ridden first half, the game wasn't completely in the clear until the onside kick call.

Barum and company knew they needed something to get them going in front of a packed house at Fontana Field.

"Leading only 3-0 at halftime we knew we had to get on the pedal and come out aggressive," said Barnum. "The onside kick was the turning point for us. It really got us going the rest of the game."

The onside kick call came from the sideline moments before the halftime kick and was not discussed in the locker room at intermission. Southington head coach Mike Drury gave credit to his defensive coordinator and his guys for the perfect execution to get his team going in a crucial moment.

"That was my defensive coordinator (Rob Levesque)," said Drury. "He called it, ... we didn't tell anybody, didn't tell any other coaches, and we executed."

The trust with special teams, who were strong all day, has been high all season. From drilling a 40-yard field goal, to recovering three onside kicks, they were a major factor in Thursday's win from start to finish.

"We have faith with Jack from close to 50 yards out, and those things are important," said Drury on Barnum's kicking ability. "The special teams have been important for us with his ability to kick the ball into the end zone and make the team go 80 yards consistently, it's a weapon in high school football."

Cheshire scored twice, once on a chip shot field goal and again on a touchdown late to make it 17-10, but a second defensive onside recovery off an onside kick from the Rams put the Blue Knights in victory formation with about a minute to go in the contest.

Barnum finished the day 18 of 26 with 186 yards passing, and went 1-for-2 in field goal attempts, likely playing in his final game on his home field. Cardillo led in rushing with 30 yards and John Flynn led in receiving with 69 yards on four catches.

Ryan Delmonte had an interception and Austin Pszczolowski had 1.5 tackles as well. Jackson Rusiecki led in tackled with nine.

On the win and the successful season as a whole, Drury mentioned the success of the team isn't off one single player's success, or from one game, and is instead a group effort across the multi-week season.

"These things don't come easy," said Drury. "There's a ton of work that goes into this throughout the entire year, it's just not with Cheshire, it's a culmination of these guys putting four years of hard work in and coming out to get their jobs done.

Thursday's win solidifies a spot in the CIAC's Class LL football postseason, earning the No. 7 Blue Knights a bid against New Canaan (9-2) on Tuesday. Kick from the opening round will come at 6:30 in New Canaan.

As always, the thought process is one game at a time for Drury and the Blue Knights. Southington has won four of its last five games dating back to Oct. 8, and has win streaks of three and four.