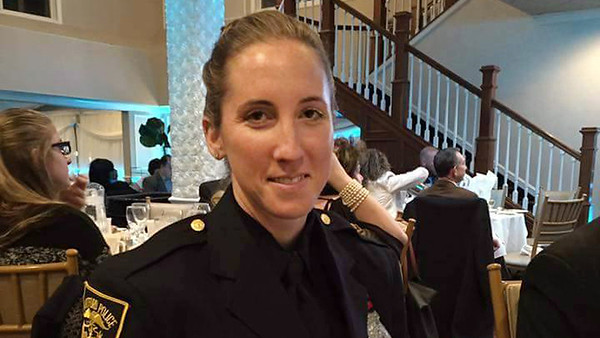 In this 2015 photo provided by the Hartford Police Department, Hartford police Officer Jill Kidik attends a ceremony in Hartford, Conn., where she was honored for saving a 1-year-old boy’s life the previous fall. Police have charged Chevoughn Augustin with attempted murder in the stabbing Kidik on Thursday, May 17, 2018. The officer underwent hours of surgery after Thursday’s attack and is in stable, but critical, condition at Hartford Hospital. (Hartford Police Department via AP) Buy this photo
Published on Friday, 25 May 2018 14:12
Written by

HARTFORD - A Hartford police officer who was critically injured in a stabbing last week has been released from the hospital.

Police say Officer Jill Kidik, a 12-year member of the department, was discharged from the hospital on Friday and is expected to make a full recovery.

Kidik was repeatedly stabbed in the neck on May 17 while responding to a tenant-landlord dispute.

Her jugular vein and trachea were lacerated. Two maintenance workers have been credited with pulling the attacker off Kidik and saving her life.

The suspect, 39-year-old Chevoughn Augustin, of Hartford, is in custody on $2 million bail and is due back in court June 5 on charges including attempted murder.