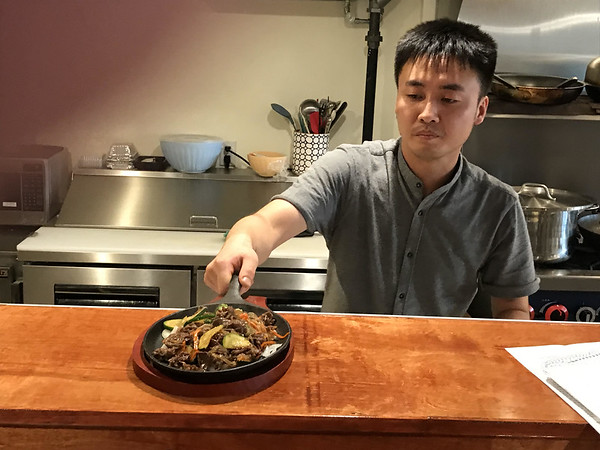 Taeho Lee, who runs the restaurant at 1095 West St. with his wife and family, came to the U.S. 20 years ago from South Korea after graduating from a cooking school. Many of his recipes were prepared and enjoyed by his family while he was growing up.

He had been a chef at the Mohegan Sun casino and sushi restaurants before deciding to start his own business.

“In my opinion, people need to know what original-style Korean food is like,” he said. “In the U.S., they change a lot of the recipes and add a lot of butter. I like making authentic Korean food.”

Koshi Sushi and Grill serves Korean dishes including bulgogi (grilled, marinated beef) and dolsot bibimbap (a rice dish) as well as sushi and sashimi, teriyaki, tempura and katsu, rolls, hibachi, rice and noodles. It also has sides, desserts, soups and salads and lunch specials and offersdelivery through DoorDash.

“Our jeyuk bokkeum is sliced pork which is marinated and grilled in a spicy Korean sauce,” he said. “We serve it with rice. We use sticky rice, not the dry fried rice like with Chinese food.”

Lee noted that the traditional dolsot bibimbap is made in a hot stone bowl. The bulgogi is marinated for 24 hours before being served.

Since coming into the building three weeks ago and opening this week, Lee said, he is starting to get many customers from a nearby hotel.

“The area is perfect and there’s a lot of traffic coming by,” he said. “People are getting to know us step by step. They have been saying it is very good, not too salty, not too strong, not too mild - a good flavor. They really like it.”