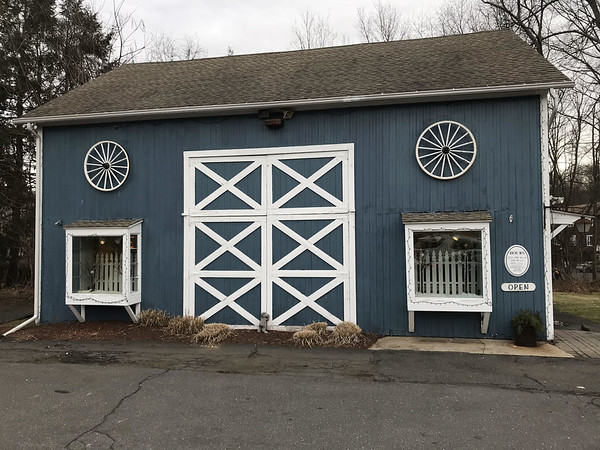 Brian Johnson | Staff The liquidation sale begins Saturday, Feb. 1 and items will begin at 25% off. Buy this photo

Brian M. Johnson | Staff A display of gift items for sale at the Old Blue Barn. Buy this photo

The Old Blue Barn, at 270 N. Washington St., was originally known as The Bargain Barn and belonged to Krysiak’s brother.

After working for him for 30 years, she decided to keep the building in the family but put her own personal touch on it. Those who stepped through the door would find eye-catching and tastefully arranged displays and walls adorned with uplifting messages.

“My sister-in-law - his wife - owned a gift shop in Plantsville and I said to myself that I’d like to do that,” said Krysiak. “I liked the idea of being surrounded by nice things and getting to know people.”

“We wanted people to feel like family,” she said. “We wanted to have a comfortable, warm place where people could shop for jewelry, collectibles, dishware and other home accessories. People would always tell me that it felt like a store at the Cape. I made friends with customers from all over the world - Australia, South Africa, New Zealand, Austria, Switzerland and Brazil.”

Krysiak said that she stayed on top of trends and made sure that when an item was “hot,” it was on her shelves.

Some popular items over the years included Camellia Jewelry and Alex and Ani Jewelry. But one of the most popular items she carried was Boyds Bears.

“Boyds Bears came here in 1999, when we won a signing, before they sold their business for $600 million,” said Krysiak. “People came here from all over to shop. People tried to sneak in that day and we had to have police here. There was a shuttle bus running back and forth from Tunxis Community College. That was the best day that I ever had in business.”

Krysiak thanked those who have supported her business for the past 25 years.

“Thank you for your friendship and, hopefully, we can continue to be friends,” she said.

During the store’s final sale, items will begin at 25% off.

As Krysiak prepares to begin her retirement, she said that she is looking forward to taking it easy and doing some traveling.