'It's been crazy and unbelievable': Some area restaurants packed with customers seeking outdoor seating, others waiting, proceeding with caution

7/27/2019 Mike Orazzi | Staff Rachel Haseltine talks with customers at Better Half Brewing in downtown Bristol on Saturday. Buy this photo 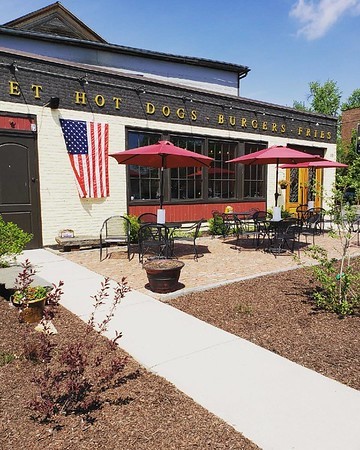 Area restaurants continued to see support from longtime customers on the second day of outdoor dining’s return to Connecticut, though not every restaurant has yet been approved for it and some still remain cautious.

It was another warm day with clear skies Thursday, which perfectly lent it to outdoor dining. And after having been unable to do anything more than pick-up food at the door for the past couple months, many people were eager to dine at their favorite eateries again. However, in some cases they will still have to wait a bit longer.

Riley’s Hot Dog and Burger Gourmet at 61 Glen St. in New Britain has chosen to hold off on opening up outdoor dining for now. Rick Charamut, who co-owns the restaurant with Deb Dalena, said while they don’t want “to rush in,” they do plan to open up their patio area eventually.

“We have decided to hold off on reopening our patio for now until we have everything in order and make sure we are in compliance with the new regulations we received yesterday from our health department,” Charamut posted on Riley’s Facebook Page. “While we are excited for our patio to be opened this season, we really want to make sure that we make the experience enjoyable, relaxing and safe for all our friends and customers.”

Charamut said Thursday he is still seeing continued support from regulars, whom he said have been “amazing.” Riley’s is still offering curbside pickup and delivery through GrubHub. Their beer menu can be viewed on beermenus.com and those who order beers to go with their food will get 10% off their order.

Better Half Brewing in Bristol has seen a high turnout from city residents with the return of outdoor dining. Rachel Haseltine, who co-owns the brewery at 59 N. Main St. with her husband Michael, said they were able to set up a shaded tent area that can accommodate around 30 people.

“So far we’ve done really good; there has been a great turnout,” she said. “It’s nice seeing our regulars again. The city has been very supportive and we’re looking forward to a nice weekend.”

Better Half Brewing is offering its full menu along with $5 beer on the patio. Haseltine added if their seats are full, they are offering to take down customers’ cell phone numbers and text them when a table is ready.

In Southington, Sean Sherman, owner of Sherman’s Taphouse, is almost ready to begin offering outdoor dining again at his restaurant at 25 Center St. as well as his Burlington location. He is shooting for being open Friday in Southington and next week in Burlington.

“At both locations we’ll have between 8 and 11 tables,” he said. “Our menu will be a little revised and we’ll be bringing out a few menu items. We’ll have 12 beer taps running at each location.”

Sherman said he “can’t wait” to see his regulars again.

“I miss seeing a lot of our customers,” he said. “Some have been keeping in touch over social media and they’ve been supporting us with pick-up but it will be nice to be able to have them stopping in and saying hello like normal.”

Sherman said he hopes the return of outdoor dining will lead to a boost in consumer confidence.

“Hopefully as people venture out they can begin acclimating back to a normal way of life,” he said.

J. Timothy’s Taverne in Plainville announced it’s reopening for takeout only and responses have been very enthusiastic. They had over 40,000 views of their announcement on social media in just two days and Tim Adams, co-owner of the taverne, said they are very excited to be back, even if just for takeout and curbside only.

While the restaurant does have outdoor dining, Adams said they decided to hold off on its reopening until they have a better grasp of the ongoing pandemic.

“Our outdoor patio usually seats about 30 to 40 people. With the social distancing rules, we’d only have about four tables open so we decided not to go with it,” Adams said. “That’s just too limiting and not great hospitality with everyone being in masks and gloves. So we’re going to see further down the road and go from there.”

The restaurant’s takeout and curbside service will have a limited menu of chicken wings, chicken tenders and fries. They are also offering local craft beer and wine at reasonable prices. Orders can only be placed by phone and they can be reached at: 860-747-6813.

“There’s something for the whole family,” Adams said. “Hopefully as we progress, we’ll be able to bring back more items from the menu, especially our smoked meats.”

Great Taste, one of New Britain’s popular eateries, has opted to not use its large parking lot as a potential space for dining.

“We did think about it, but for now we decided against it because not only are we still short staffed, we don’t really have the dining facilities like outdoor tables and chairs to do it,” said David Cheng, co-owner of Great Taste. They have been offering the restaurant’s full menu through takeout and curbside services during most of the state-wide shutdown.

In April, the restaurant had to shut it doors for a few weeks due to the closure of several delivery services from New York. Cheng said like most Asian restaurants, they depend on those deliveries for much of their food and beverage supplies. Once the delivery services reopened in early May, Cheng said they were able to open back up.

“Everyone in this community has been so wonderful and supportive,” he said. “Through our takeout and curbside, we’ve been doing OK. We’re just glad we’re able to continue in some way and as soon as the state lifts the complete ban, we’ll be back full service. In the meantime, I hope everyone stays safe and stays smart.”

The friendly neighborhood hotdog slingers, Nick and Alaina Sahadi of Sahadi’s Hotties in New Britain are back in action full swing with no breaks in between. Once they got their outdoor patio seating opened Wednesday, the hotdog slinging hasn’t stopped.

“It’s been crazy and unbelievable,” Nick said. “We’ve got five outdoor picnic tables with umbrellas and people have been coming by and filling them up. Calls have been coming in so much that I had to take it off the hook because we got so busy.”

The brother and sister duo originally thought they might have some time to ease into the business after being closed for seven weeks, but customers had other plans in mind.

“Everyone’s been sharing on Facebook that we’re back open. That’s been great. We rely on lots of word of mouth and obviously it’s working. We love it,” Nick said.

The shop is practicing social distancing and enforcing the usage of gloves/masks to ensure the safety of staff and cutomers. Business will be conducted strictly through their walk-up window only. Call ahead orders are encouraged, at 860-348-0050