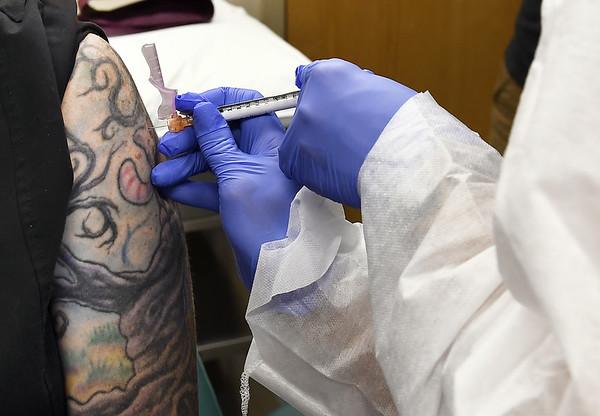 FILE - In this July 27, 2020, file photo, Nurse Kathe Olmstead, right, gives volunteer Melissa Harting, of Harpersville, N.Y., an injection as a study of a possible COVID-19 vaccine, developed by the National Institutes of Health and Moderna Inc., gets underway in Binghamton, N.Y. An influential scientific panel on Tuesday, Dec. 1, is set to tackle one of the most pressing questions in the U.S. coronavirus epidemic: When the first doses of COVID-19 vaccine become available, who should be at the front of the line for shots? (AP Photo/Hans Pennink, File) Buy this photo
Published on Friday, 4 December 2020 11:59
Written by SUSAN HAIGH and DAVE COLLINS

The goal is to have everyone in the state who wants a dose to be vaccinated by early fall of 2021.

While the state‚Äôs final detailed plan was not yet ready to be released, Lamont said the first phase of distribution will include 204,000 health care workers, 22,000 nursing home residents and 6,000 medical first responders, such as paramedics and EMTs. Lamont said those figures represent 80% of people in those groups agreeing to take a vaccine.

The Democratic governor said his state advisory group followed federal guidance, which he called ‚Äúvery sensible.‚Äù Lamont said it makes sense, for example, to vaccinate residents of nursing homes early in the process, noting how the population has been hit hard by COVID-19.

Connecticut tentatively expects to receive its first shipment of 31,000 doses of vaccine from Pfizer on Dec. 14 and its first shipment of 61,000 doses from Moderna on Dec. 21. He provided a chart that projected Connecticut receiving up to 380,000 doses of the two vaccines in batches by Jan. 25. Dr. Reggy Eadie, chief executive officer at Trinity Health of New England and the co-chairman of Lamont‚Äôs advisory group, said health care workers in key specialties, such as emergency room staff, would be prioritized.

About 31,000 second doses are expected to be shipped to Connecticut on Jan. 4, with 212,000 delivered by Jan. 25, according to the Lamont administration.

Under the state‚Äôs preliminary distribution plan, Phase 1B will run from mid-January to late May. That‚Äôs when ‚Äúcritical‚Äù workers, people living in other congregate settings such as prisons and group homes, adults 65 years and older and people under 65 who are considered ‚Äúhigh risk‚Äù for getting infected, would be vaccinated. Under Phase 2, which is expected to begin in early June, those under age 18 and remaining residents over 18 would receive the vaccine.

As of Thursday, 1,191 people were hospitalized for COVID-19 in Connecticut, a slight decrease of 11 since Wednesday. Meanwhile, there have been 5,111 COVID-related deaths, an increase of 20 since Wednesday.