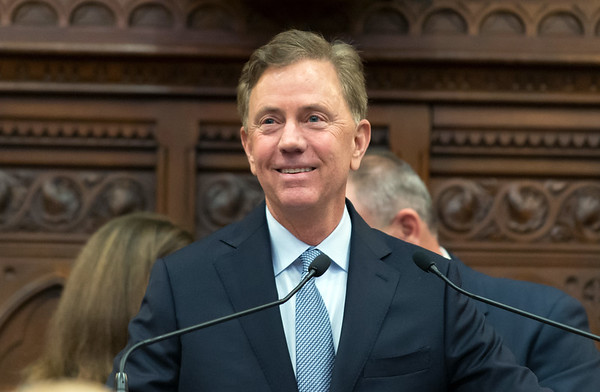 File photo Governor Ned Lamont smiles just prior to his State of the State speech to a joint session of the CT General Assembly. Buy this photo
Published on Friday, 6 August 2021 12:29
Written by SUSAN HAIGH and PAT EATON-ROBB

HARTFORD - Connecticut Gov. Ned Lamont on Thursday signed an executive order that allows municipal leaders to enact mask mandates for both vaccinated and unvaccinated people while inside public places.

This latest order allows municipal leaders to move beyond Lamont's current edict, which requires only unvaccinated people to wear masks while inside public places. It also requires everyone to wear them in specific settings, such as health care facilities, prisons, day care sites and public and private transit.

“There are some pockets of the state that are lagging behind others and some leaders in those areas have requested the option of requiring everyone to wear masks until they can get their vaccination rates higher,” the Democrat said in a written statement.

Also Thursday, Lamont signed an order that will ultimately enable Dr. Deidre Gifford, the acting public health commissioner, to require all unvaccinated nursing home staff to be tested weekly for COVID-19. This move comes as public health officials plan to visit every nursing home to check on the number of employees who've been vaccinated. Federal data show at least 16 facilities in the state have staff vaccination rates below 50%.

Heather Aaron, deputy commissioner of the Department of Public Health, said that verifying the vaccination rates of staff members will become part of the state's inspection process.

“We have not checked every nursing home specifically for that. And so that is part of something that we’re doing now,” Aaron told The Associated Press. “We’re basically saying that when we come in to do inspections, we’re going to take a look at that also.”

Aaron said state public health officials plan to stress to employees that nursing home residents are vulnerable and that many died during the earlier days of the pandemic because the virus was brought into facilities by staff.

“So if you’re going to come in, there’s a heavy responsibility on you to make sure that you’re safe,” Aaron said. “In the next few weeks, that’s what we’re going to be hammering home, that we have to make sure the nursing home is safe. We cannot go back to where we came from.”

State data released Thursday indicates the vaccination rates as of July 25 among staff ranged from 25% to 100% per facility while the vaccination rate among residents ranged from 57% to 100%, based on information the nursing homes report to the Centers for Medicare and Medicaid Services. On average, 72% of staff and 90% of residents are vaccinated statewide, according to the latest report. Meanwhile, state statistics from July 21 to Aug. 3 indicate there were 48 confirmed cases of COVID-19 among nursing home staff. Among residents, there were 51 cases and three deaths.

To date, there has been a total of 8,296 COVID-19-associated deaths in Connecticut, an increase of three since last week. All new positive cases of COVID-19 recorded over the past week stemmed from the delta variant.

Lamont has said his administration is also discussing the possibility of requiring nursing home workers to be vaccinated.