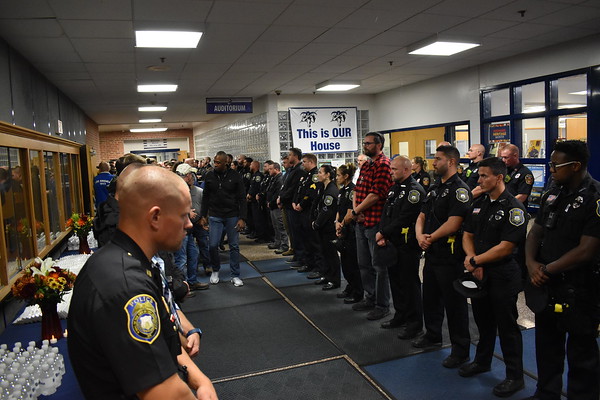 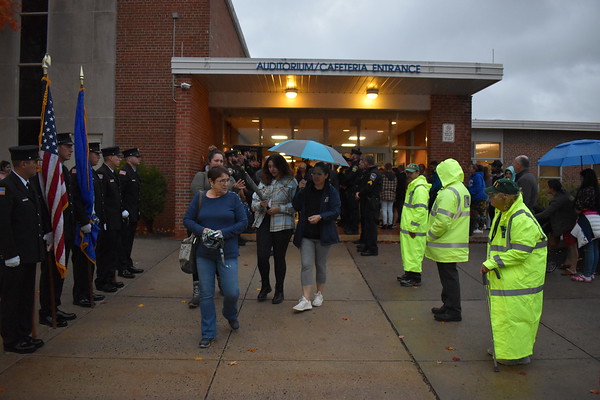 Dean Wright | Staff Area residents, officials and visitors exit a vigil in the rain after honoring the efforts and sacrifices of shot Bristol police officers. Buy this photo

BRISTOL – Rain pattered the pavement of Bristol Eastern High School Thursday evening where hundreds gathered to join a vigil in the school auditorium to support the Bristol Police Department and reflect on the sacrifices of its three officers who were shot Wednesday night.

Sgt. Dustin Demonte, 35, and Alex Hamzy, 34, were both shot and killed and Officer Alec Iurato, 26, wounded after reporting to a call of a domestic dispute between a pair of brothers. According to police reports, a suspect who opened fire, identified as Nicholas Brutcher, 35, was shot and killed in the incident.

Iurato was released from medical care earlier in the day.

“It is with great sadness that I see that our community has already come together,” said Bristol Mayor Jeff Caggiano. “It’s a night for healing, a night for being here for our officers that have fallen and for all of our service men and women.”

Bristol Police Chief Brian Gould said he stood before those in the Bristol Eastern Auditorium with “an incredible amount of sadness and grief,” however, he was honored by the number of supporters who had joined the police department.

“I can’t tell you enough how appreciative I am on behalf of the entire police department. The community support that we had today has been unreal,” he said. “You are what is going to get us all through this. We love serving our community and those three officers that went to that call of service last night, they loved serving it more than most. They were incredible, remarkable men.”

Gould said the three officers had come to a call of service looking to help but had their lives taken or injured.

“We stand ready to serve you and we will continue to serve you,” he continued, saying that fellow policing agencies were assisting the community. “But my thoughts tonight are to celebrate and honor these two officers that died in the line of duty as well as the one that was seriously injured.”

The chief lauded the accomplishments of the three officers, calling them heroes.

Gould noted Demonte had been hired in 2012 and started as a patrol officer. He was also a bicycle officer, field training officer and had impacted the area’s youth as a past school resource officer. He received a number of awards including the Officer of the Month, the Silver Star and a co-recipient for Officer of the Year 2019.

Demonte is survived by his wife and two children with a third to soon arrive, said the chief.

Hamzy was hired in 2014 and also started as a patrol officer. He graduated from Bristol Eastern High School in 2006. He received Letter of Commendation awards and was part of the Central Region Emergency Response Team, an award-winning special response unit in Central Connecticut.

Hamzy is survived by his wife.

Both Demonte and Hamzy helped mentor youth as part of the Bristol Police Explorers program.

The chief said Iurato was hired in 2018, served in the patrol division and was also a member of the Central Region Emergency Response Team.

“You see it on the news all the time and it doesn’t feel real until it happens right in your own backyard,” said area resident Andrew Collins. “I guess I’m still in disbelief that something like this could happen right here.”

Collins said he lived near the shooting on Redstone Hill Road but had not heard any gunshots because of likely being asleep at the time.

“I woke up in the morning and saw the news and the first reaction is you don’t believe it,” he continued, “that I misread something and this must be some other Bristol halfway across the country. Then you realize this is not only your own town, it's a three minute walk from where I live. Just shock.”

Liberty Baptist Church Pastor Dustin Alley led a prayer and shared a few words in memory of the officers.

“As we reflect tonight upon the lives of Sgt. Demonte and Officer Hamzy, I’d like to direct your thoughts and your hearts toward what God’s word says about men of such high caliber,” said Alley. “It was in Matthew Chapter 5 that Jesus said, ’Blessed are the peacemakers for they shall be called sons of God.’”

Alley would go on to quote the Bible saying that “Greater love has no man than this than to lay down his life for his friends.”

Gov. Ned Lamont and other state officials were also present for the vigil.