Edsall: UConn football program 'cut corners' after his departure in 2011 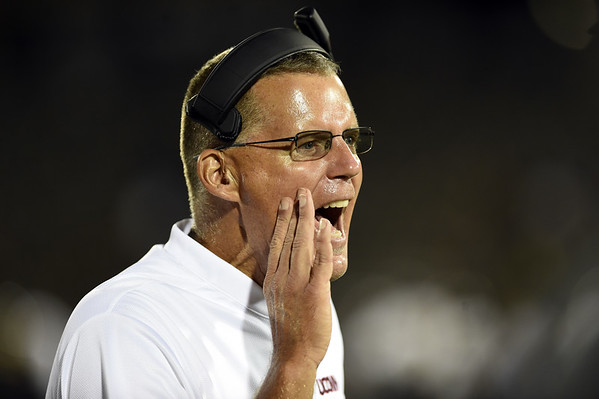 Connecticut coach Randy Edsall yells to a player on the field during the fourth quarter of an NCAA college football game against Central Florida on Thursday, Aug. 30, 2018, in East Hartford, Conn. UCF won 56-17. | AP Buy this photo
Published on Wednesday, 12 September 2018 20:40
Written by Neill Ostrout

STORRS - The UConn football program is nearing rock bottom. An 0-2 start to the season that has featured a pair of unthinkable, resounding blowouts has highlighted just how far the Huskies are from the being competitive on a national level.

But how did things get so bad at UConn and who is to blame?

In a blunt, sometimes dour press conference Tuesday at the Burton Family Football Complex that was ostensibly to discuss his team’s game Saturday against Rhode Island, UConn head coach Randy Edsall lamented the depths to which his program has sunk and even offered some blame - to those coaches and administrators at the helm after his first tenure with the team ended.

“It’s a shame what happened from 2011 to 2017,” Edsall said, referring to the years after he left the program to become the head coach at Maryland and his return prior to last season. “You can’t get it back.”

Edsall left UConn immediately after guiding the Huskies to the 2011 Fiesta Bowl. He flew to College Park, Maryland, to take his “dream job” with the Terrapins the morning after his Huskies lost to Oklahoma.

Despite his abrupt departure, Edsall apparently had hoped the program would be better taken care of in his absence.

“Our program was here when I was here in 2010,” said Edsall, holding his hand up high above his head. “Just like Boise State’s.

“Their’s (Boise State) stayed there. This one (UConn) went here,” he said, lowering his hand below his waist. “This is a massive rebuild.”

Twentieth-ranked Boise State just racked up an unheard of 818 yards last Saturday against the Huskies, pounding them 62-7. UConn has been outscored 118-24 in its first two games this season.

Edsall believes UConn might have been able to sustain some of the success his earlier Huskies had achieved had university officials made better head coaching hires following his departure.

Paul Pasqualoni was hired as Edsall’s replacement in 2011. He coached the Huskies for two-and-a-half seasons before being fired. Bob Diaco was then hired to guide the Huskies for three more seasons.

UConn has not had a winning record since Edsall’s departure, though Diaco’s 2015 Huskies were 6-6 in the regular season before losing to Marshall in the St. Petersburg Bowl.

“Take a look at Boise State. They lost coaches and what’d they do? They promoted from within. And they kept the same system all the way through,” Edsall said. “When Dan Hawkins left, Chris Peterson, same thing. They hired a guy from within because those guys knew what it took to be successful there and they kept it going. That didn’t happen here.”

Edsall did not name Pasqualoni nor Diaco by name, nor did he call out former UConn athletic directors Jeff Hathaway or Warde Manuel. But he did say those in power during his time away from UConn “cut corners” and didn’t preserve what he had built.

“It’s a great lesson that when you don’t do the right things, how quickly it can go,” Edsall said.

The state of the program is such that UConn is unable to compete with the teams at the top level of its conference, the American Athletic, nor with others in the top-25 nationally.

Now in his second season back with the Huskies, Edsall says it would be foolish to expect the Huskies to reach that level this year.

“We’re doing everything we can. But if anybody thinks we’re going to take some fairy dust, come in and just sprinkle it and all of a sudden it’s going to change? You might as well go and keep drinking alcohol or something,” Edsall said. “This isn’t easy. It’s not easy. But it’s fun. It’s fun because these kids want to do it. And they’re out there trying to do it.”

Effort or not, the Huskies were unable to do very much on Saturday night in Boise, Idaho.

“Boise State had a lot to do with why we didn’t execute. We were out-matched. We were overmatched,” Edsall said.

Edsall understands fans want results. He says he wants them too.

“I’m the guy that has to have the most patience of anybody,” Edsall said, adding later: “I have more patience now than I used to.”

UConn is facing an FCS opponent this week in Rhode Island but it’s hardly expecting an easy victory.

“We can’t overlook anybody. They’re 2-0 right now. They’re on a roll,” safety Tyler Coyle, a sophomore from Windsor, said Tuesday after practice. “We have to prepare like we prepare for any other team.”

UConn is 15-1 against FCS teams since it left that division itself. Its only defeat in that span came to Towson when Pasqualoni was at the helm.

“When I was here before we didn’t have an issue with FCS teams. And nothing against FCS teams,” Edsall said.

After their second straight abysmal defensive performance, the Huskies made a number of changes to their depth chart for this week’s game against Rhode Island.

Freshman Jeremy Lucien has been elevated and will start at cornerback in the spot that last week was manned by Ryan Carroll.

Also, sophomore linebacker Eddie Hahn will start at weak-side linebacker in place of Darrian Beavers. Beavers, a sophomore who has shown some good pass-rushing skills in the past, has been moved to defensive end.

Hahn, Edsall said, will also be an asset for freshman linebacker Kevon Jones, helping with defensive play calls and alignments.