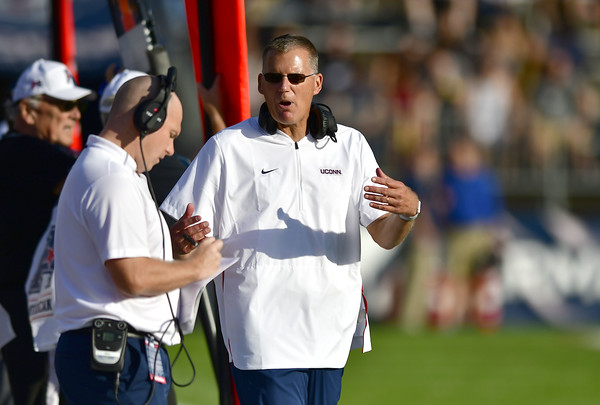 The historically bad numbers UConnâ€™s football defense is registering this season has gotten the Huskies plenty of unwanted national attention.

But thereâ€™s another set of numbers thatâ€™s further putting UConn in a negative light and giving more fuel to those making sport of the schoolâ€™s football misery and/or questioning if the school should be in the football business at all.

Despite going 1-8 with a freshman- and sophomore-dominated lineup, coach Randy Edsall - whose $1.1 million salary is the second lowest in the American Athletic Conference - has made $32,000 in bonuses this season thanks to a contract thatâ€™s full of per-game incentives that reads like a list of proposition bets one can make for the Super Bowl.

Despite losing 49-19 at Tulsa Saturday, Edsall earned $2,000 because the Huskies scored first.

The Edsall bonus saga has been going steadily viral in the college football twitterverse and UConn blogosphere since Oct. 3. Thatâ€™s when USA Today college sports financial writer Steve Berkowitz sent a tweet that called attention to the per-game incentives Edsall receives when the Huskies score first, win the turnover battle, have more tackles for loss, and finish with better red zone efficiency, among other goals. Edsall is also earning $10,000 a win, which so far has translated to $40,000 through 21 games.

By themselves, the bonuses are a relative pittance in big-money FBS football. But every dollar UConn spends these days is scrutinized as it struggles to maintain an $83 million athletic budget without a big-money conference TV contact to support it.

Edsallâ€™s earning incentives while the team is losing by an average of 27 points a game has raised a lot of eyebrows nationally. Edsall brought more attention to himself and the bonus plan when he said â€śhe could care (less) how many we win or loseâ€ť as he talked about his rebuilding plan last week, though he walked those comments back somewhat in a press conference Sunday.

The bonus structure was devised by UConn athletic director David Benedict when he bought Edsall back in 2017 as a means to improve on what started as a $1 million dollar annual salary. That might be a lot to Joe Six-Pack, but it puts Edsall in the lower middle class among FBS football coaches.

Edsall is making $600,000 less than what Bob Diaco made in 2016, the last of his three seasons in Storrs. Edsall, who was paid $2.56 million a year at Maryland, has yet to officially sign a contract, but that is expected to happen now that a state court has ruled his hiring of his son Corey as an assistant did not violate state ethics law.