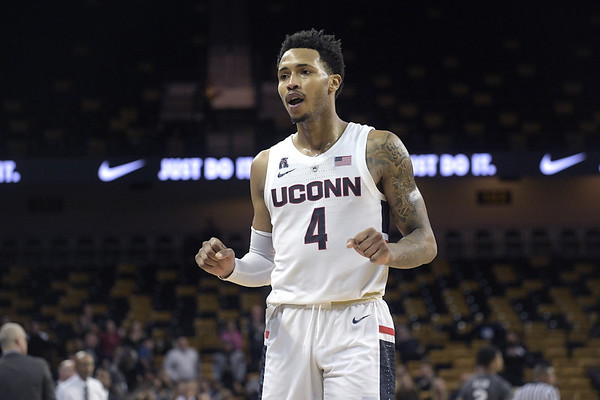 Connecticut guard Jalen Adams (4) reacts after a play during the second half of an NCAA basketball game against Central Florida Thursday, Jan. 31, 2019, in Orlando, Fla. UCF won 73-67. (AP Photo/Phelan M. Ebenhack) Buy this photo
Published on Thursday, 7 March 2019 21:43
Written by

STORRS - Jalen Adams was in many ways anointed before he even witnessed the throne. Being tagged as the next Shabazz Napier or the next Kemba Walker is not a crown many could tolerate.

Yes, when Adams joined the UConn men’s basketball team, many expected him to do great things. And, in fact he has.

Only 11 players in UConn history have scored more points than Adams. Only eight have more assists.

On the other hand, UConn’s prodigious success over the previous few decades - four national championships since 1999 - makes for a difficult comparison. Adams, assuming the Huskies don’t make a ridiculous rally and win next week’s American Athletic Conference tournament, will become the first UConn player since Tate George in 1989-90 to leave after four years with the program and fail to reach two NCAA Tournaments.

“There’s a lot of expectations, but like good expectations,” Adams said on the eve the Huskies’ Senior Night game in Gampel Pavilion last night against Temple. “You’re expected to win. You’re expected to produce. I think in some cases you get too much pressure on you and it’s like overwhelming, but I feel like my time here has been a positive.

“We haven’t been winning as much as we’d like to, but I think the UConn fans base and a lot of people have stuck by us.”

It certainly has been a difficult ending to Adams’ Husky career, as he missed the final home game of the season due to the knee injury that has kept him out of the UConn lineup for the last month.

“He’s had a lot of great moments here,” UConn coach Dan Hurley said. “I’m sure he’s learned so much about himself, grown, matured, developed so much in his time here. Obviously it’s disappointing to not be out there for that last one. But he’s been attacking his rehab great and doing a good job keeping the other guys’ spirits up while he’s been out.”

He still hopes to return, perhaps next week in Memphis for the conference tournament, but Adams admits he hasn’t discussed specifics yet with the coaching staff or medical personnel at UConn.

“We haven’t even gotten into detail on a return,” Adams said. “It’s kind of just been day-by-day, to keep my mindset in the right place.”

Adams’s legacy at UConn will obviously be highlighted by his 75-foot buzzer-beater in the 2016 AAC quarterfinals against Cincinnati, a shot that propelled the Huskies to a four-overtime victory and an NCAA berth. He’s OK with that, to some extent.

“I really just want to be remembered as a good guy, by my teammates, through the coaching staff. That stuff lasts forever,” Adams said. “It was a great shot - a lucky, great shot - but I think the friendships I’ve built on the court, people in my grade and class, I think I’ve built some solid friendships that will last a lifetime.”

Adams’ playing career won’t end when he leaves UConn this spring with a degree in urban and community studies. He still has designs on making his way to the NBA, or at least pursuing a professional career at some level.

One of the guards on Hurley’s Rhode Island team from last season, Jared Terrell, is on a two-way contract with the NBA’s Minnesota Timberwolves. The coach says Hurley has at least as much potential.

“Jalen’s as talented almost as any guy I’ve coached,” Hurley said. “If he can really lock in and commit to every aspect of what it takes to be a great professional, he could do what Jared did.

“I think I said to him at the beginning of the year ‘If you’re not a two-way player (NBA/G-League) to a second-round draft pick then one of us didn’t do our job this year.’ ”

Adams has earned a spot at the Portsmouth Invitational, the annual showcase for college seniors trying to embark on professional careers.

Whatever the final statistics show for Adams’ senior season in Storrs, he feels confident that he’s helped lay the groundwork for an upswing in UConn basketball.

“The record obviously doesn’t show it but I think it’s been a huge year for UConn in total. I think the program is going to take off very, very soon,” Adams said.