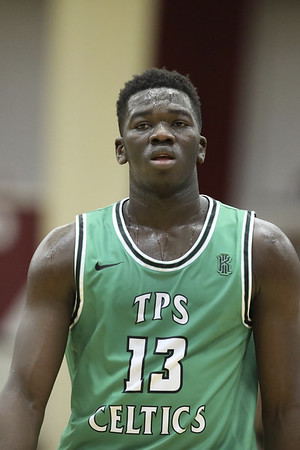 The Patrick School's Adama Sanogo at the 2020 Hoophall Classic in Springfield, MA | AP Buy this photo
Published on Friday, 29 May 2020 19:51
Written by NEILL OSTROUT

The UConn menâ€™s basketball team officially has its first player from Mali in the fold.

Adama Sanogo, a 6-foot-9, 240-pound big man originally from the west African nation currently at The Patrick School in Hillside, New Jersey, has signed a National Letter of Intent with the Huskies, the school announced Thursday.

The addition of Sanogo, who verbally committed to join coach Dan Hurleyâ€™s team earlier this month, fills the Huskiesâ€™ last open scholarship for the 2020-21 season as the Huskies return to the Big East.

â€śWe are extremely pleased to have Adama join the UConn family,â€ť Hurley said in a statement. â€śHeâ€™s a warrior - the kind of young, talented, physical forward who we can mold into a high-level player. Heâ€™s received great coaching at the Patrick School from Chris Chavannes and he was challenged by top competition both there and with the New York Rens.â€ť

Sanogo, who averaged 13.5 points and 10.5 rebounds in 14 games for The Patrick School as a senior, was originally planning to take a postgraduate year but instead reclassified in order to enroll in college this fall.

He ultimately chose the Huskies over offers from Seton Hall, Maryland and Nebraska.

Sanogo came to the U.S. from Mali as a high school sophomore and attended Our Savior New American School in Centereach, New York for two years before transferring.

â€śPhysically, Adama separates himself from everyone else,â€ť Chavannes said in a statement. â€śHeâ€™s extremely agile - he can go right and left, go by you, over you, and overpower you. Heâ€™s a vacuum on the offensive and defensive boards. Coach Hurley is a tough coach and Adama will embrace that.â€ť

Because of coronavirus restrictions, Sanogo did not visit UConnâ€™s Storrs campus, though he did get a virtual tour during Zoom meetings with the coaching staff.

â€śAdama completes an outstanding recruiting class that we expect will put us in a position to compete at a championship level,â€ť Hurley said. â€śWe are looking forward to the time when we can finally bring everybody to campus.â€ť UConn has not said when athletes can return to Storrs for workouts.

The Huskiesâ€™ other newcomers include point guard R.J. Cole and forward Richie Springs, who were with the program last season but did not play, and Rhode Island transfer Tyrese Martin, a junior wing who will likely have to sit out one year.