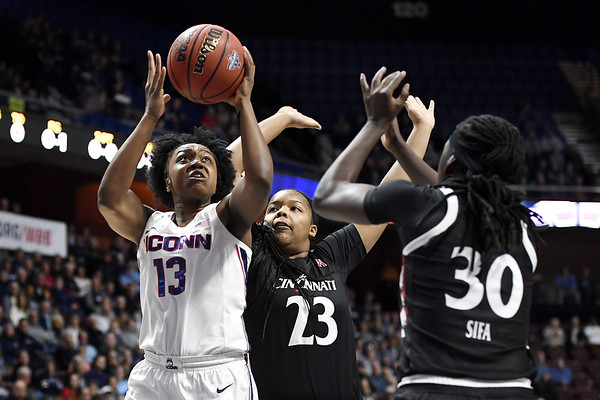 Connecticut's Christyn Williams (13) shoots over Cincinnati's IImar'I Thomas (23) and Florence Sifa (30) during the first half of an NCAA college basketball game in Uncasville. | AP Buy this photo
Published on Monday, 1 June 2020 14:42
Written by CARL ADAMEC

It was just about noon on Saturday when Christyn Williams tweeted her feelings that followed the death of 46-year-old George Floyd five days earlier.

Floyd, who is black, was handcuffed and lying face down on a Minneapolis street during an arrest on May 25 as a white police officer, Derek Chauvin, kept his knee on Floyd’s neck for almost nine minutes.

“As a black collegiate athlete it is concerning that I have not seen ANY universities use their platform on social media to post anything concerning the social injustice that’s happening in America right now!” the UConn women’s basketball team’s rising junior guard wrote.

While there had been reaction from schools from around the country prior to Williams’ tweet, the Huskies - from men’s coach Dan Hurley and his players to the women’s team and its coach, Geno Auriemma - were heard over the remainder of the weekend.

Chauvin was charged Friday with third-degree murder and manslaughter as protests following Floyd’s death have raged across the country. Three other Minneapolis police officers on the scene were fired.

One of the first reactions, though, came from incoming freshman Paige Bueckers, who will graduate from Hopkins High in the Minneapolis suburb of Minnetonka on Thursday. She tweeted Friday to her 26,500 followers:

“I am white. I will never be able to understand what it’s like to be a person of color. With that being said, it does not make me any less angry just because I, myself, am not going through it. It’s sickening and there is a need for action instead of words. It’s TIME FOR CHANGE!

“When will things actually change for the better? When will people of color stop being judged by the color of their skin? What will it take to change? It hurts just thinking about how far we have to go, but we have to start somewhere.”

Hurley’s reaction went out to his Twitter followers Saturday evening.

“Since learning of the inhumane murder of George Floyd, all I can feel is sorrow and, because I am a white man, I also feel incredibly ashamed,” said Hurley, who will be entering his third season in Storrs later this year. “Ashamed of the treatment of Black Americans in our country.

“Growing up in Jersey City and growing up around basketball exposed me to so much diversity. I was lucky. I wasn’t conditioned to think about people of different ethnic backgrounds as better or worse. We were all just people.

“Changing the culture of social injustice and racial inequality must finally be fully addressed. I have an important role moving forward. As a leader I must use my platform to create change.

“Since the beginning of the week, our staff and players are having open and engaged dialogue on these critical issues and how we can impact the communities that need us. We understand our responsibility in helping to heal this country.”

The women’s basketball team released a statement from its players to its Twitter followers Sunday.

“As a team we are hurting,” the statement said. “We feel responsible for speaking out and advocating for our black community and the injustices we face. Racism is not getting worse, it’s getting filmed, and more people are becoming aware of the 400 years of oppression that black people have been subjected to in America.

“We are nauseated by the social injustice and police brutality that is reoccurring toward the black community. So yes, we kneel during the national anthem. Yes, we are rioting. And yes, we are protesting because we are tired of innocent black lives dying at the hands of police officers who do not care about our humanity.

“For those who are not black, silence is the biggest betrayal right now. The hardest part is watching friends who are not of color not even question what is happening right now. It’s time for us to start preaching togetherness, justice, and love amongst one another.

“We are proud to be a team made up of diverse women who will never stop pushing for the most basic human rights for our people. Standing up, fighting for what you believe in, and bringing attention to these injustices is the only way it will progress.

“As a team we are here. We are listening. We are woke.”

Incoming freshman Aaliyah Edwards in her retweet of the statement added the comment from it, “Racism is not getting worse, it’s getting filmed.”

The UConn team statement was posted on its Facebook page, which generated 652 comments as of this morning. Not all were favorable, with some fans taking the position they thought players were endorsing non-peaceful protest. Those comments generated their own backlash as the large majority of fans supported the team.

Auriemma also backed his players with a statement on Instagram.

“I’m really proud of my team. Agree or disagree if you like. But having lived through the 60s, it was young people standing up that brought meaningful change.

“I don’t agree with some of the actions we see playing out. But those are the consequences of being given an opportunity to make changes and disregarding the voices of the people in distress.”

Former men’s guard Christian Vital tweeted a photo from last season of his team standing in line with their arms locked.

He wrote: “This Picture I See Men With DIFFERENT Shades Of Color DIFFERENT Ethnicities DIFFERERNT Backgrounds BUT Locked In Arms Ready To Compete & Battle For Each Other Despite Those Differences! IT IS POSSIBLE TO DO THAT!”