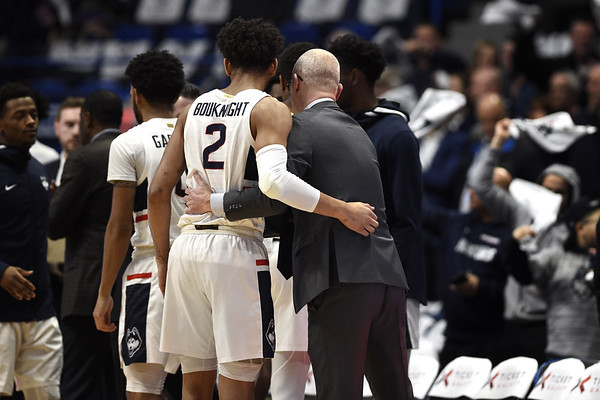 In part because he is a leader of a team made up mostly of men of color, Dan Hurley feels an especially strong responsibility to help the country make a true change.

The killing of George Floyd and the reaction to his death along with other recent incidents of police brutality has been a true “eye-opener,” the UConn men’s basketball coach says, so much so that he intends to take action in order to effect change.

“There’s much more required of me in the position I have,” Hurley said during a conference call with reporters Wednesday. “It’s my responsibility to lead the UConn men’s basketball program and bring about real change and action. When the social media ends and the protests end, it’s going to be about action.”

The 47-year-old Hurley, who is about to begin his third season with the Huskies, is ready to make awareness and activism part of the daily life of his coaches and players.

“What I’m doing, what we’re doing in the communities that need us in Connecticut to make change and help change occur now has to be a part of our daily practice,” Hurley said.

Like many around the nation, Hurley says his players, who are predominantly African American, are in pain.

The coach, also, was rather emotional when discussing the state of affairs across college basketball and the world Wednesday. One of Hurley’s primary concerns, and the one he believes he could make the most difference, is the educational system and the opportunities afforded to African Americans.

“Of the 13 to 15 guys that I have in program, realistically only two or three of them may make enough money playing basketball to have a quality life,” Hurley said. “How well are we preparing the other 12 or 13 in terms of their full education and preparation to get a high-quality job?”

That is part of his job as a coach and educator, Hurley said, and is one of the reasons he went into the profession in the first place.

“I got into coaching because there’s no feeling in the world better than impacting the lives of someone else,” Hurley said. “Being a great service and changing someone’s life, there’s nothing better.”

Earlier this week Hurley posted a message on his social media accounts condemning the “inhuman murder” of Floyd. “I feel incredibly ashamed. Ashamed of the treatment of black Americans in our country,” Hurley wrote.

Although he has been around men and women of color for nearly all of his life, dating to his childhood as the son of legendary New Jersey high school basketball coach Bob Hurley Sr., Dan Hurley admits that it would be insulting for him to assume to understand what life is like as a black man in America.

“It’s easy for me and Bob,” Hurley said of he and his brother, now-Arizona State head coach Bob Hurley Jr. “We were insulated because of the way we grew up. It doesn’t help us relate to the life experience of a black man.”

What he and the Huskies specifically do moving forward is being talked about presently, Hurley explained.

“We’re having conversations now in terms of outreach with community leaders and police officials, how we can improve those relationships,” Hurley said. “We’re trying to learn, we’re to listen, we’re trying to figure out where we can help.”

Though they continue to meet via Zoom and other online platforms, Hurley’s team is not currently together physically because of coronavirus concerns. Making that happen, at least for basketball reasons, is not the most important thing at this point, Hurley seems to believe.

“This is like an unbelievable time to look at yourself, deep inside yourself and your relationship to others,” Hurley said.