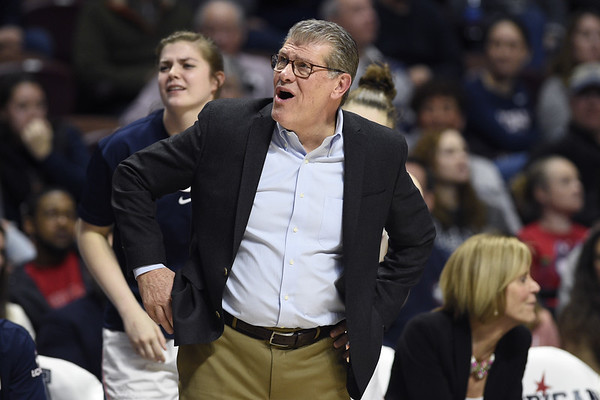 Geno Auriemma reacts during the second half of an NCAA college basketball game in the American Athletic Conference tournament semifinals against South Florida at Mohegan Sun Arena, Sunday, March 8, 2020, in Uncasville. | AP Buy this photo
Published on Thursday, 2 July 2020 12:34
Written by CARL ADAMEC

In normal times, the players on the UConn women‚Äôs basketball team would be wrapping up summer school this week. They‚Äôd then either head home or perhaps travel for an event with USA Basketball before returning to Storrs for the start of the fall semester.

But nothing has been normal during the COVID-19 pandemic.

‚ÄúEverything has changed,‚Äù UConn coach Geno Auriemma said Wednesday on a Zoom call with reporters. ‚ÄúEverything is different. Every day there are new guidelines or there are new protocols, new recommendations, and requirements, what you can and can‚Äôt do.

We‚Äôre supposed to be kind of like a pilot program. It all seemed like a great idea and it still does. But even when school starts it is not going to be the same. Recruiting is not the same. ‚ÄòHey, we want to do a home visit.‚Äô No. What are you going to do? ‚ÄòHey, we want you to come up on campus.‚Äô No. ‚ÄòWe want to have these workouts on these days with this many players.‚Äô Well, maybe you can, maybe you can‚Äôt.‚Äù

Auriemma hopes to have the 10 players on his roster on campus by July 26, but his three international players - sophomore Anna Makurat (Poland), and freshmen Aaliyah Edwards (Canada) and Nika Muhl (Croatia) - may have issues getting into the United States due to travel restrictions.

The Hall of Fame coach has asked for help from the state‚Äôs congressional delegation.

‚ÄúThat‚Äôs where it all has to start,‚Äù Auriemma said. ‚ÄúI‚Äôm fortunate that I have a great relationship with our congressmen in Connecticut. And the neat thing about this is that this isn‚Äôt a situation where one side wants it and one side is going to argue about it. This isn‚Äôt a Democrat or a Republican thing. This is something that affects an awful lot of people in the country and it doesn‚Äôt matter what side of the aisle you are on.

‚ÄúI‚Äôm keeping my fingers crossed that something can be done to facilitate these kids coming over to go to school. The athletic piece is just a small piece of the big picture of all our international students who have committed to being here and have come here.‚Äù

UConn men‚Äôs basketball players returned to campus June 19, with football players coming back on Wednesday. Auriemma opted for his players to come back at a later date, noting the coaches would not be able to work with them until July 20.

Like other athletes, the returning players will have to test negative for the coronavirus and then quarantine.

In the meantime, Auriemma has weekly Zoom conferences with juniors Christyn Williams, Olivia Nelson-Ododa, and Evina Westbrook, who are expected to take leadership roles on a young team.

But what the Huskies (and everyone else) missed out was having their freshmen get accustomed to college life and work out with their new teammates during the early summer session.

UConn‚Äôs freshmen - Edwards, Muhl, Mir McLean, Paige Bueckers, and Piath Gabriel - are rated the No. 2 recruiting class in the country.

‚ÄúThey have a workout program and everyone is doing it,‚Äù Auriemma said. ‚ÄúThen what? Then when they get here they realize ‚ÄòYeah, I did the program but that doesn‚Äôt mean I‚Äôm ready to play college basketball. That doesn‚Äôt mean I‚Äôm ready for practice. Having been here in June and having gone through some of this stuff, that would have helped get ready a little bit more.‚Äù

There‚Äôs an excitement in the air surrounding UConn basketball making its return to the Big East, which became official on Wednesday. The Huskies will play 20 regular season league games - home and home against the other 10 conference schools.

For Auriemma, the players, and their fans, they hope that there is a season just to start to get back to normal.

‚ÄúI‚Äôm not confident on anything anymore,‚Äù Auriemma said. ‚ÄúA month ago, I thought we were on the right track. Things are great. We‚Äôve done all the right things here in Connecticut. We‚Äôre in the process of bringing our players back. Then each week since then it seems like there is one place that is setting records.

‚ÄúI don‚Äôt know what to think anymore. I made the statement, and I stand by it. If they figure out a way to do college football - and they will leave no stones unturned to make that happen, believe me - then we‚Äôll be OK. But if they don‚Äôt, then all bets are off for everybody.‚Äù