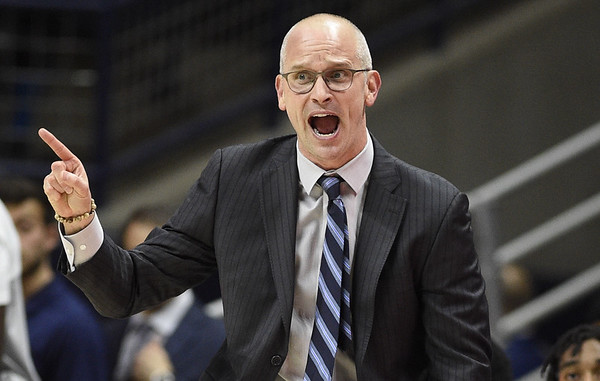 It‚Äôs beginning to look a lot like college basketball season. At least, it is in places one can virtually go.

The 2020-21 season may be delayed and come with a host of COVID-19 restrictions, but for the UConn men‚Äôs basketball team, the holidays and special occasions are nearly here.

Wednesday was a significant marker for the Huskies, who received a goal to strive for, a few minor accolades and a significant portion of their schedule during the Big East‚Äôs annual media day.

The Huskies, returning to the league they helped found in 1979 after a seven-year hiatus, were picked to finish fourth in the preseason coaches‚Äô poll. Sophomore guard James Bouknight was named to the all-Big East second team.

Villanova, which has dominated the league in many ways during UConn‚Äôs time away, was picked to win the conference and received nine first-place votes. Creighton received the other two first-place votes and was the second choice, followed by Providence and then the Huskies.

The preseason poll and all-league teams were announced this morning as part of the Big East Media Day. It was held virtually, with the league‚Äôs coaches and select players joining reporters via Zoom.

The poll and preseason teams were determined by a vote of the league‚Äôs head coaches, who were not allowed to vote for their own players.

In addition to the usual release of a poll and teams, the Big East also revealed the 23 games it hopes to play over a two-week stretch in the middle of December.

Five of those games involve UConn, who along with the rest of the league are hoping to play a full 20-game Big East schedule despite possible COVID-19 postponements and cancellations.

The first conference game of UConn‚Äôs second stint in the Big East will be against a familiar opponent. UConn will host St. John‚Äôs Dec. 11 at Gampel Pavilion, one of three games on what will be the opening night of play in the Big East.

Assuming there are no COVID-19 complications, the Huskies will then pack four more games into the next 12 days. They will play at Georgetown Dec. 13, at Providence Dec. 17, at home against Creighton Dec. 20, then at DePaul Dec. 23.

All of UConn‚Äôs home games will be played in Storrs, as opposed to the customary splitting of games between Gampel Pavilion and the XL Center in Hartford.

It‚Äôs still not clear if fans will be allowed to attend games at some point this season for UConn home games, though these opening league games will almost certainly be played with a minimum amount of attendees.

The television coverage for the December games, as well as the remainder of the league schedule, will be announced later.

Bouknight averaged 13.0 points a game as a freshman, starting the final 16 games, and is the team‚Äôs top returning scorer. He made the all-American Athletic Conference freshman team and helped UConn win nine of its final 12 games a season ago.

UConn‚Äôs 2019-20 season ended with a 19-12 record just as it was about to begin play in the AAC Tournament. Precautions to avoid the spread of COVID-19 cancelled the event and virtually all of college basketball‚Äôs postseason.

Creighton guard Marcus Zegarowski was named the league‚Äôs preseason player of the year. The junior is the top returning scorer in the Big East, having averaged 16.1 points per game a season ago.

Marquette forward Dawson Garcia was the choice for preseason freshmen of the year.