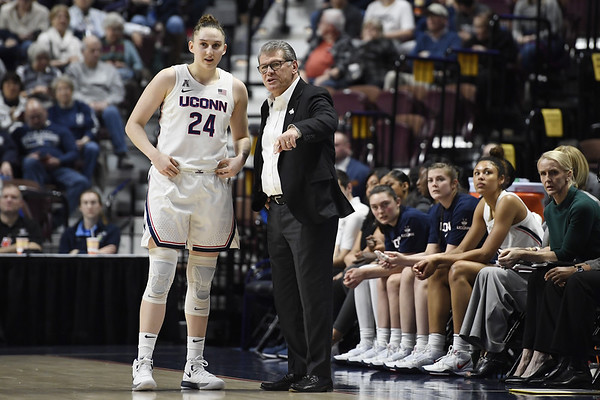 The UConn women's basketball team stopped paying close attention to polls a couple of decades ago. So that the Huskies are No. 3 in the Associated Press preseason poll released today didn't change anything at the Werth Champions Center.

UConn, though, will learn if it deserves a lofty ranking in the first 10 days of its regular season schedule.

After opening the season against Quinnipiac Nov. 28 in the first round of the Women's Hall of Fame Challenge at Mohegan Sun Arena, the Huskies may face Mississippi State, ranked No. 6 by the AP. Then on Dec. 4, they'll return to the casino to take on No. 5 Louisville.

South Carolina, which was 31-1 and No. 1 in the final AP poll a season ago, retained the top spot today by receiving 29-of-30 first-place votes and 749 points. Stanford was second with one first-place vote and 698 points followed by UConn with 695 points.

A year ago, the Huskies were ranked No. 5 in the preseason and climbed to No. 1 in late December after the teams above them - Oregon, Baylor, Stanford, and Maryland - suffered early losses. They held the top spot for three weeks until early January when they fell to Baylor at the XL Center in Hartford ending their 98-game home winning streak. UConn has been No. 1 at some point during the season the last eight years and in 21 of the last 26 seasons since earning its first top ranking on Jan. 17, 1995.

The Huskies return three starters - juniors Christyn Williams and Olivia Nelson-Ododa, along with sophomore Anna Makurat - from last season's 29-3 club that swept the American Athletic Conference regular season and tournament titles for the seventh straight and final time before the NCAA Tournament was cancelled due to the COVID-19 pandemic. They add redshirt junior Evina Westbrook, who sat out last year after transferring from Tennessee, and welcome six freshmen led by No. 1 recruit Paige Bueckers. Williams was named the Big East preseason Player of the Year while Bueckers was the preseason Freshman of the Year.