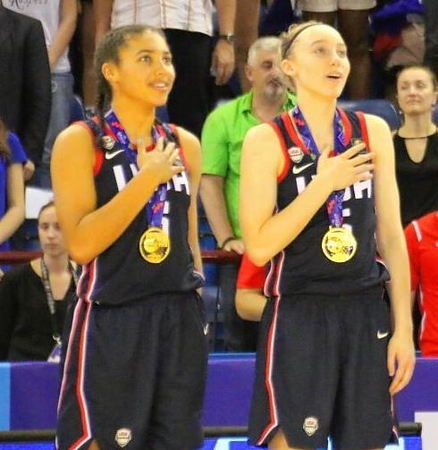 Azzi Fudd, left, and Paige Bueckers during the 2018 FIBA U-17 World Cup in Belarus | Photo courtesy of USA Basketball Buy this photo
Published on Thursday, 12 November 2020 18:16
Written by CARL ADAMEC

When Paige Bueckers made her verbal commitment to the UConn womenās basketball team in 2019, Azzi Fudd was one of her friends who she trusted to keep her secret until she made it public later.

When Fudd decided she would sign with UConn late last month she returned the favor to Bueckers, who kept her silence until the Class of 2021ās consensus No. 1 recruit made it official Wednesday morning.

āThat just shows you what kind of teammate she is,ā Fudd said with a laugh Wednesday night. āPaige is great and I canāt wait to get to UConn to play with her and everyone else there.ā

Thereās no doubt about Fuddās ranking as sheās been the top recruit in her class since she entered St. Johnās College High. Her decision made her day that included her fifth annual youth basketball clinic to raise money and awareness for the Pat Summit Foundation that much more special.

āEveryone has been excited and happy for me and it seems like Iāve received text messages and calls from everyone,ā Fudd said. āThere was a lot of energy and a lot of positivity around. Itās been hard with COVID these past few months. But everything today felt positive and felt right.ā

Fudd has been on the recruiting radar for awhile, having received her first scholarship offer from Maryland while in sixth grade.

She was 14 when she became the youngest player to make USA Basketballās U-16 national team in 2017 and helped Team USA, coached by former UConn star Carla Berube, to the gold medal at the FIBA Americas U-16 Championship. A year later, she teamed in the starting backcourt with Bueckers to help guide the Americans to gold in convincing fashion at the 2018 FIBA U-17 World Cup in Belarus by averaging 9.7 points and 3.9 rebounds.

In 2019, Fudd became the first high school sophomore to be named Gatorade national Player of the Year and she was also USA Todayās Player of the Year as she averaged 26.3 points and 6.2 rebounds in leading St. Johnās to the WCAC and DCSAA state championships.

But in April of 2019, Fudd tore her ACL and MCL in her right knee on a drive to the basket at USA Basketballās U-18 3x3 national championship. The ensuing surgery cost her the early part of her junior season though she did return in time to lead St. Johnās to the DCSAA state title.

Now sheāll get ready for her senior season and her future at UConn.

āItās an honor and Iām really excited to be part of the UConn family,ā Fudd said. āI canāt wait to get to campus and join them.

āIām excited to get to work and be a part of it and hopefully win some more national championships.ā

Fudd, whose announcement Wednesday coincided with her 18th birthday, chose UConn over UCLA, Maryland, and Louisville. The opportunity to play with Bueckers and another one of her best friends Ducharme was part of the appeal.

The Huskies had more of what she wanted.

āI have goals of playing in the WNBA, being an Olympic gold medalist, and all that good stuff,ā Fudd said. āI realized that to achieve those goals and become the best player and person I can be, UConn was the best place for me. If I want to win national championships and compete day in and day out, UConn is that place. I can trust Coach Auriemma, Chris Dailey and Shea Ralph. Everyone there, the players included, will get me to that point.

āIt was a hard decision. But when it came down to it I wanted to be somewhere that I would be proud of and know I made the best decision for me.ā

Fudd is the 13th No. 1 recruit overall and fourth in five years to sign with UConn.

She is named after her motherās favorite player growing up - former Stanford All-American and Olympic gold medalist Jennifer Azzi - and will become the second player to play for the Huskies whose mother played against Auriemmaās teams. Katie Smrcka-Duffy was a standout and all-Big East performer at Georgetown who faced UConn during its first tenure in the Big East. Freshman Mir McLeanās mother, Ayanna, went against UConn while playing at Northeastern in 1991.

UConn, which does not have a senior on its roster, has one more scholarship available for the Class of 2021.