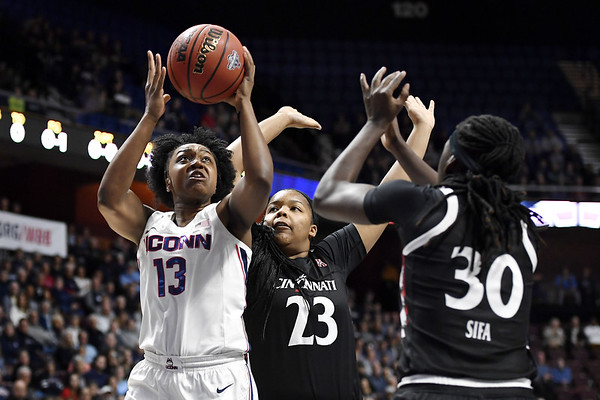 Connecticut's Christyn Williams (13) shoots over Cincinnati's IImar'I Thomas (23) and Florence Sifa (30) during the first half of an NCAA college basketball game in the American Athletic Conference tournament finals. | AP Buy this photo
Published on Friday, 20 November 2020 10:22
Written by CARL ADAMEC

Christyn WilliamsÔÇÖ patience is being tested.

The UConn womenÔÇÖs basketball team has been back on the Storrs campus since late July. Practice started officially on Oct. 14. The HuskiesÔÇÖ first game is Nov. 28 against Quinnipiac in the WomenÔÇÖs Hall of Fame Challenge at Mohegan Sun Arena marks the HuskiesÔÇÖ latest starting date since Dec. 1, 1992.

ÔÇťWeÔÇÖve been practicing for so long,ÔÇŁ Williams said. ÔÇťItÔÇÖs like games would have started already. WeÔÇÖre learning every day and weÔÇÖre growing every day as a team.

The COVID-19 pandemic caused the start of regular season play to be pushed back by two weeks and it took four games off of most teamsÔÇÖ schedule. In their return to the Big East, the Huskies are set to play 20 league games along with six non-league games.

The first week of their season will be in the ÔÇťBubblevilleÔÇŁ of Mohegan Sun Arena. TheyÔÇÖll face either No. 6 Mississippi State or Maine on Nov. 29 and then complete their stay at the casino with a Dec. 4 contest against No. 5 Louisville.

ÔÇťI think itÔÇÖs great weÔÇÖre playing at Mohegan,ÔÇŁ UConn coach Geno Auriemma said. ÔÇťSo many things will be under control with the bubble and everything will be organized and protocols will be in place.

ÔÇťAnd our games there will be really enlightening. If we play Mississippi State, thatÔÇÖs a top-5 opponent right there. And facing Louisville will be a great situation for our players to be in. Maybe our schedule for this young group is too much too soon. But the more weÔÇÖre challenged the more itÔÇÖs good for our team. WeÔÇÖll see if weÔÇÖre ready for it.ÔÇŁ

UConnÔÇÖs first four Big East games have dates as do the remaining non-league games with No. 4 Baylor (Jan. 7 in Waco), Tennessee (Jan. 21 in Knoxville), and No. 1 South Carolina (Feb. 8 at Gampel Pavilion).

The Huskies enter without a true senior for the first time in 14 years and with a roster made up of a majority of freshmen in 32 years.

UConn returns three starters - junior guard Williams, junior center Olivia Nelson-Ododa, and sophomore wing Anna Makurat - from last seasonÔÇÖs 29-3 club that swept the American Athletic Conference regular season and tournament titles for the seventh consecutive year. Also back from a year ago is sophomore forward Aubrey Griffin while redshirt junior guard Evina Westbrook is eligible and working her way back from knee surgery after sitting out 2019-20 due to NCAA transfer rules.

Then there are their six freshmen who make up the nationÔÇÖs No. 2 recruiting class - guards Paige Bueckers, Nika Muhl, and walk-on Autumn Chassion, forwards Mir McLean and Aaliyah Edwards, and center Piath Gabriel.

The Huskies are ranked third in the preseason Associated Press poll.

Now the Hall of Fame coach, who enters his 36th season with 1,091 wins (third all-time behind the late Pat Summitt with 1,098 and Tara Vanderveer with 1,094) must bring it together.

It starts with the veterans, in particular Nelson-Ododa and Williams, who must take on bigger roles and be leaders.

ÔÇťBut what does leadership mean?ÔÇŁ Auriemma said. ÔÇťLeadership means being someone your team can count on. ÔÇśWe need a bucket. IÔÇÖm going to get it. We need a rebound. IÔÇÖll grab it. We need a stop. IÔÇÖve got it!ÔÇÖ Leadership is making things happen to help us win. They talk about intangibles but in my mind itÔÇÖs a tangible thing. Who do you look to when the team needs something?

ÔÇťLiv and Christyn have to be there for us when we need them and thatÔÇÖs got to be there every day. I like to think that is what they want and that they want to be viewed that way. TheyÔÇÖre playing with a lot of kids who really donÔÇÖt know the system yet and thatÔÇÖs not easy. They have to be a better version of themselves every day and the good thing is that they are trying to be.ÔÇŁ

Westbrook has about as much college experience as Williams and Nelson-Ododa, but it was at Tennessee. She also has not played a game since March 2019.

The talent is there.

ÔÇťSheÔÇÖs still working her way back into basketball shape because itÔÇÖs been a long time since sheÔÇÖs been on the court,ÔÇŁ Auriemma said. ÔÇťThere are still things she is working through, so give her time. But sheÔÇÖs an aggressive kid who plays with an aggressive edge. ThatÔÇÖs been good.ÔÇŁ

Makurat and Griffin appear ready to make a sophomore jump. Makurat, in particular, came back in great shape and is making more of an impact on every possession.

The hype about the freshmen, of course, surrounds mostly Bueckers. The nationÔÇÖs No. 1 high school player has also been successful on the international stage and has won four gold medals playing for USA Basketball. A year ago she was on a 3x3 team with former UConn All-American Napheesa Collier and other WNBA first-round draft picks Jackie Young out of Notre Dame and Ruthy Hebard out of Oregon.

ÔÇťWith USA Basketball, there are no bad players on the court,ÔÇŁ Bueckers said. ÔÇťThereÔÇÖs a high standard that you are held to like here as well. Here itÔÇÖs championship or bust. With USA Basketball itÔÇÖs gold medal or bust. Being held to that standard of excellence where itÔÇÖs expected and demanded, itÔÇÖs carried over to here.ÔÇŁ

The Huskies are expecting to compete for the programÔÇÖs 12th national championship and bid for their 13th consecutive appearance in the NCAA Final Four. When last seasonÔÇÖs NCAA Tournament was canceled due to the pandemic, it ended their NCAA-record run of consecutive 30-win seasons at 14.

The non-league portion of their schedule and the better teams in the Big East should challenge them.