UConn says positive test wasn't from a player or a coach 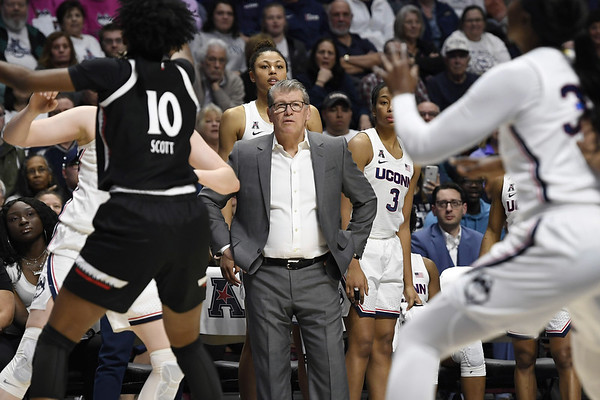 STORRS - UConn coach Geno Auriemma says he's been trying to convince his team that despite having the start of its season postponed for an additional two weeks because of a positive coronavirus test, everything is going to be just fine.

“I'm sure there was a guy on the Titanic who was in charge of saying that,” Auriemma said Tuesday. “I just hope I'm not that guy.”

The Husky players are in quarantine for 14 days after someone in the program - not a player or a coach, according to Auriemma - tested positive on Monday for the novel coronavirus. The coaches are not isolating themselves because they did not have contact with the infected person, Auriemma said.

The positive test led to the third-ranked Huskies canceling their first four games and the subsequent cancellation of the entire Hall of Fame Women's Challenge, the event that was to kick off their season on Saturday. That tournament was to feature UConn and No. 6 Mississippi State.

The Huskies have also lost games with in-state foe Quinnipiac, No. 5 Louisville, and the planned Big East opener against Seton Hall. Auriemma said he expects that only the Seton Hall game will be rescheduled.

The Huskies are now scheduled to open the season on Dec. 15 at home against Butler, a game that will mark UConn's return to the Big East after seven years in the American Athletic Conference.

In the meantime, if no other coronavirus tests come back positive, UConn players can begin working out with their roommates in small “pods” on Saturday. Full practices are scheduled to resume on Dec. 8.

Team members will have two more coronavirus tests this week. Auriemma said the person who was found to have the virus is not symptomatic and it's possible the result might have been a false positive. He said he doesn't know if subsequent negative tests would allow UConn to get back to work sooner.

The Huskies have seven first-year players, including six freshmen, and Auriemma said he's not sure how the layoff will affect his young team's preparation for the season, either physically or mentally.

But he is convinced that there will be more COVID-19-driven changes to this season.

“Everybody is going to be in this scenario at some point,” Auriemma said. “Either already has been, is, or will be. You can just pretty much predict that."