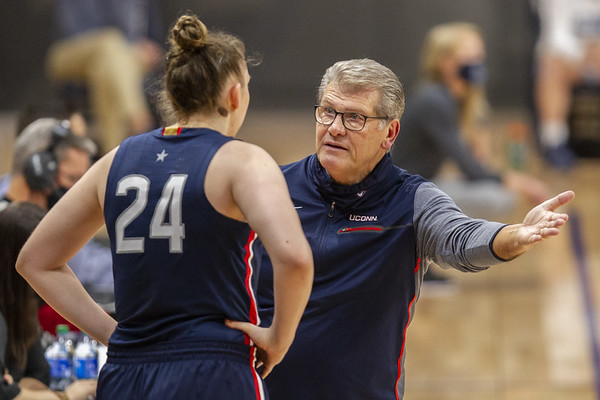 One of the best parts of covering a UConn women‚Äôs basketball game at Villanova happens before the game.

As coach Geno Auriemma makes his way from the Huskies‚Äô locker room to the court at what is now Finneran Pavilion following renovations three years ago, it‚Äôs like he‚Äôs a politician working the rope line. The Norristown, Pennsylvania native grew up with this guy. The next guy was a friend of his brother. There would always be guys who worked with his father back in the day. And Auriemma would give everyone his time with a handshake and some words and a smile, maybe a picture, before reaching the court and being greeted himself by Wildcats‚Äô coach Harry Perretta.

The pandemic changed a good part of that Tuesday. Time changed another part as Perretta retired after last season and was replaced by one of his former players, Denise Dillon.

But Auriemma made it a point to turn back the clock, at least a little bit, early on Tuesday.

‚ÄúI got here a little early,‚Äù Auriemma said Tuesday night after his third-ranked Huskies picked up a 90-52 win over Villanova. ‚ÄúHarry and I talked. He met us for shoot-around and we got a chance to catch up for a long time. It was just great to see him. Harry and I go back to when I was an assistant coach at Saint Joseph‚Äôs and he just got the job at Villanova. We played each other I don‚Äôt know how many times. So it was really great to get caught up.‚Äù

Perretta coached Villanova for 42 years and for the first 53 meetings between the Wildcats and Huskies. Villanova won the first 14. Then in 1989 Heidi Robbins made a 3-pointer - the only one she attempted in her career - to give UConn a victory at the Storrs Field House.

When the final buzzer went off Tuesday night, the Huskies advantage in the series was at 37-17.

Since 1990, UConn is 17-1 at Villanova‚Äôs on-campus home. It‚Äôs never been easy, though, Auriemma claims. He got a brief history lesson while touring a new attraction in the building.

‚ÄúThey have this thing here called, ‚ÄòMoments of Greatness,‚Äô ‚Äù Auriemma said. ‚ÄúI made sure I walked all the way down the hallway and read the whole thing. They had like seven things, and like four of them were beating us in different stages.‚Äù

One was the Wildcats knocking off Diana Taurasi and No. 1 UConn at the Pavilion in 2004. Another was from a year earlier when they ended the Huskies‚Äô then-NCAA record 70-game winning streak and nine-year reign as Big East Tournament champion in the final played at Rutgers.

Some history was on the line Tuesday night. If Villanova could pull another upset, Dillon would become the second person to beat an Auriemma-coached team as a player (she was a freshman when the Wildcats beat UConn in 1993 at Gampel Pavilion) and as a head coach. South Carolina coach and former Virginia All-American Dawn Staley is the only one to accomplish it.

Led by three-time Big East Player of the Week Maddy Siegrist, Villanova stayed close until late in the first half when two-time Big East Freshman of the Week Paige Bueckers took charge. Then UConn juniors Evina Westbrook, Olivia Nelson-Ododa, and Christyn Williams did their thing and a rout was on. Bueckers and Nelson-Ododa had 19 points each with Williams adding 18 and Westbrook 17. Siegrist was held to 15 points, two - the first basket - in the second half.

‚ÄúRight now we have a huge talent advantage, no question about that,‚Äù Auriemma said. ‚ÄúPlaying in the Big East isn‚Äôt going to be easy. We‚Äôve played some games where we made it look easy, but that‚Äôs because they haven‚Äôt seen us in a long time. Once they start seeing us and getting a feel for us this is going to change. You have teams that figure things out pretty quickly.‚Äù

It was a great day from the start.

Auriemma also took the opportunity to meet up with Villanova men‚Äôs coach Jay Wright earlier and noted the two-time national champion ‚Äúhas the best job in the world, forget America‚Äù and added that he‚Äôs a Hall of Famer. Then his Huskies capped off an 11-day stretch of five games with their best performance.

There‚Äôs still some good to come as some tomato pies and Philly cheesesteaks were coming back home to Connecticut with him for the holiday.

So do some others.