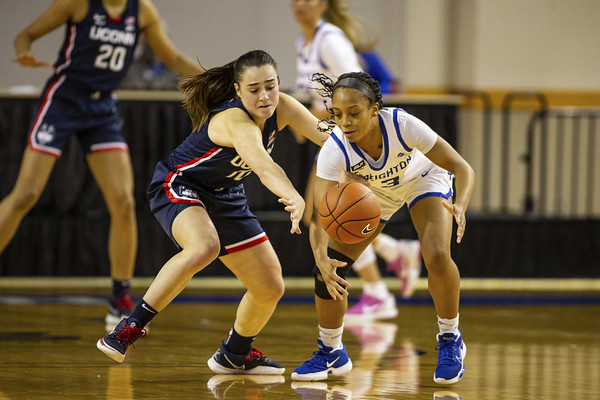 OMAHA, Neb. - Geno Auriemma doesn't profess to be hip, so even he wasn't exactly sure what he meant when he disclosed his new term of endearment for Nika Muhl.

"She's my slime, man. What can I tell you?" the Connecticut coach said. "They tell me that's the ultimate, so that's her. Nika is my slime."

Yes, a check of the urban dictionary reveals that to be slime is a good thing. Muhl just laughed when told what her coach called her.

As far as Auriemma was concerned, the freshman from Croatia merited plaudits for the way she took control of both ends of the court early in the Huskies' 81-49 victory Thursday night.

Muhl scored 15 of her season-high 19 points and made three of her five steals in the first quarter as the top-ranked Huskies won the outright Big East regular-season championship.

The Huskies (19-1, 16-0) never lost a league game in their seven years in the American Athletic Conference, and now they're two wins away from being perfect in their return to the Big East.

"When you're in a conference, you try to win the conference," Auriemma said. "All those years in various versions of the Big East, the last seven years in the AAC and now back in the Big East, that's always goal No. 1. That's the thing players will respond to because it proves you're the best team among the peers you compete against every day."

Temi Carda had a season-high 24 points and eight rebounds for Creighton (7-10, 6-7), which matched its most lopsided home loss under 19th-year coach Jim Flanery.

Creighton scored the first basket of the game for a lead that lasted all of six seconds. Muhl then fueled a 22-4 run for the Huskies, making three 3s while scoring 11 of her team's first 16 points.

Muhl entered the game 3 of her last 17 on 3s and was shooting 26% from distance in conference play.

"I was building my confidence a lot in practice the past few days and they were leaving me quite wide open at the beginning of the game," Muhl said, "so I just took the shots and they went in."

UConn pulled further ahead in the second quarter with the help of lockdown defense. The Bluejays missed 12 of 15 shots, Aubrey Griffin had three blocks and the Huskies controlled the boards on both ends.

"The start was my fault," Flanery said. "We decided to kind of trick it up and we played basically a two-person zone and three chasers and left Muhl, and she made us pay. Despite that, for the balance of the game we competed."

Christyn Williams had 16 points for the Huskies, Paige Bueckers added 13 and Olivia Nelson-Ododa had a double-double with 11 points and 11 rebounds.

The Huskies scored 24 points off Creighton's 17 turnovers and outrebounded the Bluejays 41-27.

UConn swept the season series, having won 80-47 in Storrs, Connecticut, in December.

Bueckers' nine assists gives her 34 in her last four games.

"She loves getting an assist probably more than she loves scoring," Auriemma said. "There are some kids that live to shoot, they live to score points. Paige is one of those kids that would rather get you a bucket than get herself one. That says a lot about her and why our team is where we are right now."

Bueckers has scored in double digits in 18 of 19 games she's appeared in this season. ... Williams has scored 16 or more points in four straight games. ... The Huskies played the fourth of five straight road games, their longest stretch of away games since 1980. ... UConn is 155-0 in conference play since 2013 and has won 228 against unranked opponents since 2012.

UConn: At Butler on Saturday.