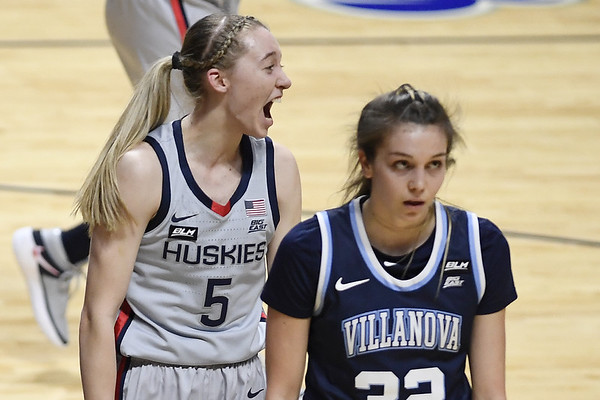 The UConn womenâ€™s basketball team has had its share of No. 1 recruits come to Storrs, but few like Paige Bueckers.

The expectations surrounding her due to her success at Hopkins High in Minnesota and with USA Basketball were sky high. No one understood this better than her college coach, Geno Auriemma.

â€śCoach talked about this in the beginning,â€ť Bueckers said this month. â€śI donâ€™t have to live up to any expectations but the ones I put on myself, the ones my coaches need from me, and the ones my teammates need from me. I care about the people who are in my circle who I can count on and who I can trust. I care about their opinion and their voices, but Iâ€™m not going to be perfect for anybody. Iâ€™m always going to have something that people are going to nitpick.â€ť

The 5-foot-11 guard hasnâ€™t been perfect for the Huskies. But it would be hard to imagine where they would be without her.

Bueckers was named to the Associated Press All-America first team, which was announced today. She joins Maya Moore as the only UConn freshman to be so honored.

Bueckers received 28 first-team votes from the APâ€™s 30-member national panel and her 146 points (points on a 5-3-1 basis) topped the All-America list.

â€śPaige just happens to be right for this team because she has the right temperament and the right skill level to help make our team better,â€ť UConn coach Geno Auriemma said this month. â€śIf Paige had a different mindset or temperament and still had all the skills she had, it might not work. But because she has the skills you need to be a really good player, and she has the temperament to handle all the things that she needs to handle for our team, and she has enough composure to handle all the off the court stuff that is out there these days, sheâ€™s different.

â€śShe has to handle all these things that didnâ€™t exist when some of our other freshmen came through here that ended up having amazing success.â€ť

UConn (24-1) is the top seed in the NCAA Tournament River Walk Regional and will play No. 16 High Point in a first-round game Sunday at the Alamodome in San Antonio.

Bueckers enters the NCAA Tournament averaging 19.7 points on 53.9 percent shooting from the floor, 4.5 rebounds, 6.1 assists, and 2.3 steals. She has set a UConn freshman single-season record with 146 assists and set the program single-game mark with 14 assists against Butler on Feb. 27.

She became the first UConn player to score 30 points in three consecutive games. In the third game of that streak on Feb. 8 against then-No. 1 South Carolina, she scored the Huskiesâ€™ final four points of regulation and all nine of their overtime points in a 63-59 victory.

â€śPaige does not shy away from the big moments,â€ť Williams said. â€śAs a competitor, thatâ€™s what we need to go far. She just needs to continue what sheâ€™s been doing.â€ť

Bueckers became the second player to Moore to sweep the Big East Player of the Year and Freshman of the Year honors.

She then became the first to add Big East Tournament Most Outstanding Player as she helped guide UConn to wins over St. Johnâ€™s, Villanova, and Marquette.

â€śObviously I feel pressure to perform and do whatever it takes for the team to win,â€ť Bueckers said. â€śIf that is shooting the ball, scoring, or if that is playing defense and using my length or getting everyone else involved, I can impact the game in different ways. Itâ€™s not just what you see on the scoreboard or in the stats. Itâ€™s me doing whatever it is our team needs to win. Thatâ€™s what I am most focused on.â€ť

Her selection marks the eighth consecutive year UConn has been represented on the AP first team, with Megan Walker being honored a year ago.