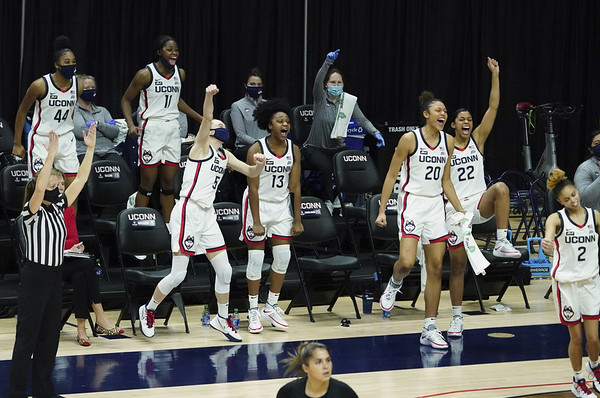 Autumn Chassion is not one to back down from a challenge. In fact, the UConn women‚Äôs basketball team‚Äôs freshman guard goes at them head on.

‚ÄúI feel like there‚Äôs always more to life and I never want to settle or be complacent,‚Äù Chassion said Monday night. ‚ÄúIf there are higher goals to reach, I‚Äôm going to reach for them. I‚Äôm always wanting more. One thing about me is that I‚Äôm willing to try something that‚Äôs hard and not take the easy way out.‚Äù

Her latest foray brought her from her hometown of Lafayette, Louisiana to Storrs to join the Huskies as a walk-on. A year after completing a career that saw her help Lafayette Christian Academy to three Division IV state titles and a Division III finals appearance, she headed to San Antonio Tuesday with the Huskies for the NCAA Tournament.

If someone had told her that‚Äôs where she‚Äôd be as part of the No. 1 team in the country, what would she have said?

‚ÄúI would have told you that I could only hope that what you were telling me was true,‚Äù Chassion said. ‚ÄúI would have hoped what you were telling me wasn‚Äôt some kind of joke but that this would be exactly what I ended up doing. Last year on this date was my last game of high school and I didn‚Äôt know when I would play next. I‚Äôm glad that basketball is back on track and we‚Äôre able to play. To be with the No. 1 team in the country, I think I‚Äôd been overwhelmed.‚Äù

UConn (24-1) is the top seed in the River Walk Regional and will play No. 16 High Point out of the Big South Conference in its opener Sunday at 8 p.m. at the Alamodome.

Chassion was a three-year starter at LCA and averaged about 15 points and 10 assists as a senior. The Lady Knights went 124-21 in her four seasons including 32-3 her senior year. LCA won three straight Division IV state titles and advanced to the Division III final a year ago before falling to reigning division champion St. Thomas Aquinas.

‚ÄúEverything happens for a reason,‚Äù Chassion said. ‚ÄúAs my grandmother always told me, ‚ÄòJust pray about it and put it in God‚Äôs hands and don‚Äôt worry about it.‚Äô It was frustrating at some points. But I didn‚Äôt worry about the people who didn‚Äôt recruit me. I was grateful for what I had.‚Äù

Without an offer she liked or was looking for, she took a chance and reached out to UConn coach Geno Auriemma to see if he‚Äôd give her a chance to be a walk-on. He gave her that chance and she ran with it.

Her only experience being around top-level talent was when she traveled to Colorado Springs, Colorado, and took part in USA Basketball‚Äôs 2018 U-17 national team trials as an applicant candidate. Among the players there were her current UConn teammates Paige Bueckers and Aubrey Griffin, and future teammates Azzi Fudd, Caroline Ducharme, and Amari DeBerry.

She did not get past the first cut but it was worth the effort.

‚ÄúI definitely learned that I needed to get a lot better,‚Äù Chassion said. ‚ÄúThat was really the first time I had seen players outside of Louisiana. I hadn‚Äôt played much AAU ball before that. I think I was one of the smallest players in the camp. I grew four of five inches in high school after that so I was 5-foot-3 at the time.

‚ÄúI didn‚Äôt know then there were players that I‚Äôd be teammates with but I knew these were the kind of players who I wanted to play with. These were the big dogs from around the country. It pushed me to work harder after seeing them because I realized I wasn‚Äôt where I needed to be at that point.‚Äù

She‚Äôs played in eight games and totaled 15 minutes of action. She has eight points, two rebounds, and three assists. She scored five points against Butler on Jan. 19 and added a 3-pointer against St. John‚Äôs on Feb. 3.

Her last appearance was on Feb. 5 at Marquette. A leg injury has kept her off the court in recent weeks and she said she is hopeful that she could be available soon.

Chassion believes she‚Äôs raised her game since arriving in the summer.

‚ÄúI think that learning from the coaches, learning from my older teammates, and learning from the kids in my class has helped me,‚Äù Chassion said. ‚ÄúWhen I got here everything was so fast. I think I‚Äôve learned to slow things down and be more calm when I am on the court.‚Äù

One of the highlights of the season came while she was on the sidelines.

During the third quarter of UConn‚Äôs Jan. 9 game with Providence at Gampel Pavilion, Paige Bueckers called a time out to save a possession. As the Huskies‚Äô five on the floor sat in their chairs waiting for instructions, Auriemma went to the perimeter of the huddle and guided Chassion - who had his clipboard - to his seat facing the players. He then walked away as Chassion addressed her teammates.

‚ÄúI think I could be a coach if I wanted to some day,‚Äù Chassion said with a smile. ‚ÄúCoach was upset that we weren‚Äôt really talking on defense much. He looks at me and goes, ‚ÄòYou‚Äôre smart, maybe they‚Äôll listen to you.‚Äô He was joking around, nothing super-serious. But he was upset. So he sat me down in his chair and I told the players, ‚ÄòJust go out there and talk and it will help on switches and screens and help us guard them.‚Äô Then CD (associate head coach Chris Dailey) repeated what I said. They went back out there and talked and really picked things up.‚Äù

While she works to improve on the court, she continues to do what she‚Äôs always done off the court - excel in the classroom.

Chassion was LCA‚Äôs 2020 valedictorian with a 4.0 grade point average. She recorded a perfect 4.0 during the fall semester.

‚ÄúIt felt so good to get a 4.0,‚Äù Chassion said. ‚ÄúIt happened so easily in high school that I really didn‚Äôt know what to expect when I got to college. But I felt it was something do-able if I worked hard and it‚Äôs something I want to continue to do as I go on.‚Äù

And she could. Rising to challenges is what she does.