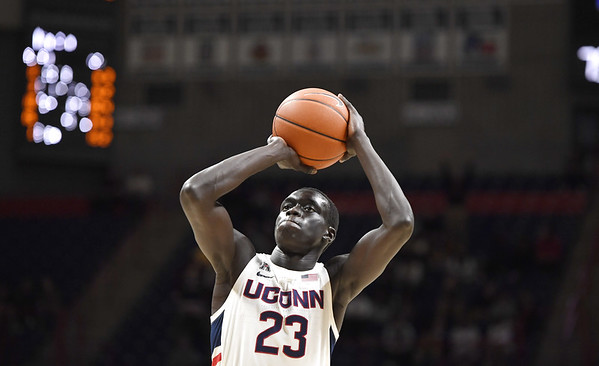 STORRS - Akok Akok can‚Äôt wait to show you what he can do.

Some UConn fans may remember what the long-limbed, shot-blocking sensation from Sudan via Manchester, New Hampshire, is capable of on a basketball court. Others, like Akok himself, may have had trouble getting the image of the 6-foot-9 forward writhing on the floor of the XL Center some 18 months ago after tearing the Achilles tendon in his left leg.

Today, as he and his teammates go through summer workouts, Akok says he‚Äôs completely healthy.

‚ÄúI feel 100 percent. I‚Äôm doing it on both ends again. And I can‚Äôt wait to showcase that this season,‚Äù Akok said Wednesday outside the Werth Center on the UConn campus.

The seven games he played in the 2020-21 season didn‚Äôt show the true player Akok is, he insists. This year, he believes, it will be like old times.

That‚Äôs in stark contrast to the way he felt late in the Huskies‚Äô win over Memphis Feb. 16, 2020, when Akok suffered his horrific injury.

At the time of his injury, Akok was averaging 5.8 points and 5.5 rebounds and ranked 13th in the nation in blocked shots. And a man UConn coach Dan Hurley called, along with James Bouknight, one of the foundational recruits he had brought to the program, was starting to blossom at both ends of the floor.

His rehab efforts resulted in a rather early return from the injury - he came back Jan. 9 against Butler - but it was eventually clear that Akok needed more time.

He ended up appearing in seven games in the Huskies‚Äô most recent campaign, accumulating a total of nine points, three rebounds, and one blocked shot. Seven of those points came in a Feb. 13 game against Xavier when it appeared Akok may have turned the proverbial corner. But he did not play in UConn‚Äôs final five games of the season.

‚ÄúXavier game, I felt pretty good the Xavier game. That was just a moment I had been waiting for,‚Äù Akok continued. ‚ÄúI knew I was going to get a lot of production, but I wanted to contribute as much as I can.‚Äù

His specialty, protecting the Huskies‚Äô rim, was notably absent from his repertoire upon return.

‚ÄúComing back, I wanted to be one of the best defensive players (in the nation). But it‚Äôs hard. When you‚Äôre away from the game for a long time, the timing was off,‚Äù Akok said. ‚ÄúI never thought it would come to that point. When I got back, blocking shots, I didn‚Äôt know it was as difficult as that. But now, coming back in June and getting my timing back, and all these months to work on my game, it‚Äôs all coming back now.‚Äù

Akok said Hurley kept preaching to him over the last year-and-a-half that ‚Äúyour time will come.‚Äù And most of the Huskies seem to believe that time is now.

‚ÄúI think it‚Äôs just time and building that confidence in yourself,‚Äù Gaffney said. ‚ÄúBut that comes with the workouts every day, practices, working out on your own time. And he‚Äôs been living in the gym.‚Äù

The Huskies are, under NCAA regulations, allowed eight hours of supervised workouts, including weight training, each week this summer.

Last season after such practices and training sessions, Akok said his surgically repaired left leg would be in serious pain.

The only pain for Akok now is the loaded frontcourt the Huskies boast in which at least four players have designs on starting positions. Akok, naturally, wants his spot back.

He said he‚Äôs some 15 pounds heavier than his playing weight of 18 months ago, crediting UConn‚Äôs strength and conditioning coaches with helping him bulk up his frame properly.

The biggest battle for Akok since his injury, however, may have been on the mental side of the game. It helped Akok that a well-known basketball player who had suffered the same injury is thriving in his sport once again.

Kevin Durant, after missing all of the 2019-20 season while recovering, averaged 26.9 points per game for the NBA‚Äôs Brooklyn Nets this season. He shot a career-high 53.7 percent from the field, including a career-high 45.0 percent from 3-point range.

‚ÄúSeeing what KD did, he was just killing it all year,‚Äù Akok said. ‚ÄúThat was really a confidence boost. That helps me a lot mentally.‚Äù